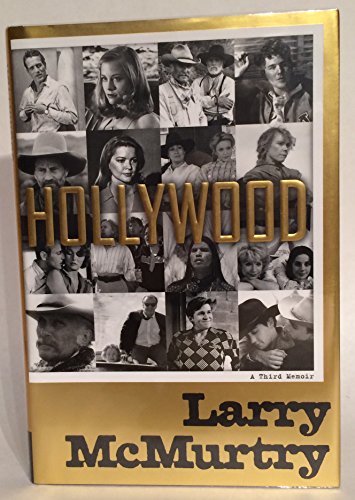 "One thing I’ve always liked about Hollywood is its zip, or speed. The whole industry depends to some extent on talent spotting. The hundreds of agents, studio executives, and producers who roam the streets of the city of Los Angeles let very little in the way of talent slip by."

In this final installment of the memoir trilogy that includes Books and Literary Life, Larry McMurtry, "the master of the show-stopping anecdote" (O: The Oprah Magazine) turns his own keenly observing eye to his rollercoaster romance with Hollywood. As both the creator of numerous works successfully adapted by others for film and television (Terms of Endearment, Lonesome Dove, and the Emmy-nominated The Murder of Mary Phagan) and the author of screenplays including The Last Picture Show (with Peter Bogdanovich), Streets of Laredo, and the Oscar-winning Brokeback Mountain (both with longtime writing partner Diana Ossana), McMurtry has seen all the triumphs and frustrations that Tinseltown has to offer a writer, and he recounts them in a voice unfettered by sentiment and yet tinged with his characteristic wry humor.

Beginning with his sudden entrée into the world of film as the author of Horseman, Pass By—adapted into the Paul Newman–starring Hud in 1963—McMurtry regales readers with anecdotes that find him holding hands with Cybill Shepherd, watching Jennifer Garner’s audition tape, and taking lunch at Chasen’s again and again. McMurtry fans and Hollywood hopefuls alike will find much to cherish in these pages, as McMurtry illuminates life behind the scenes in America’s dream factory.

Although he is most famous as a Pulitzer Prize–winning novelist, McMurtry has worked for decades as a screenwriter. He and his partner, Diana Ossana, won the 2005 Academy Award for the screenplay of Brokeback Mountain. This is the third installment of a trilogy of memoirs dealing with McMurtry’s artistic experiences, and it covers more than 40 years of his career interacting with Hollywood figures and the process of turning the written word into celluloid. This is the most intriguing of the three memoirs; it has an oddly detached tone, since McMurtry often writes like a starstruck outsider who fails to realize he has become a Hollywood insider. He asserts that he lacks a passion for the screenwriting craft and the filmmaking process, but he approaches the topic with relish. The memoir is divided into a series of short, often disconnected chapters in which a constant theme is the fact that the vast majority of screenplays, including his own, never become films. In his wanderings, McMurtry ranges from the role of agents to the difficulty of producing westerns to the tedium of attending awards ceremonies. He includes numerous vignettes in which he discusses his relations with various Hollywood personalities, some famous and some obscure. His descriptions are not always charitable, but they are consistently sharp, interesting, and enjoyable. --Jay Freeman

Book Description Condition: New. This is a brand new book! Fast Shipping - Safe and Secure Mailer - Our goal is to deliver a better item than what you are hoping for! If not we will make it right!. Seller Inventory # 1XGJHR000AQK_ns