Items related to Night of the Fox

Higgins, Jack Night of the Fox

Night of the Fox 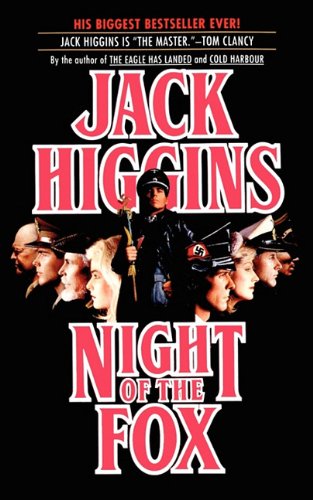 On a secret sea maneuver just before D-Day, American Colonel Hugh Kelso goes down in the English Channel. Wounded and adrift for days, he washes ashore on the German-occupied island of Jersey. The news spreads panic through the Allied high command: Kelso knows the time and place of the invasion. He must be rescued -- or silenced.

A British professor turned Nazi impersonator and a young Jersey girl posing as his mistress set off to find Kelso in the fiercely guarded island fortress. The pair join a deadly game of wits that they must win....or perish in the darkness of the Night of the Fox

Since The Eagle Has Landed―one of the biggest-selling thrillers of all time―every novel Jack Higgins has written has become an international bestseller. He has had simultaneous number-one bestsellers in hardcover and paperback, and many of his books have been made into successful movies, including The Eagle Has Landed, To Catch a King, On Dangerous Ground, Eye of the Storm, and Thunder Point. He has degrees in sociology, social psychology, and economics from the University of London, and a doctorate in media from Leeds Metropolitan University. A fellow of the Royal Society of Arts, and an expert scuba diver and marksman, Higgins lives in Jersey on the Channel Islands.

An American colonel who knows the secrets of forthcoming D day has washed up, wounded, on the German-occupied island of Jersey, off the coast of England, and must be rescued. Thus the basic premise of Higgins's most tingling thriller since The Eagle Has Landed. An ex-philosophy don of part-German descent is assigned to effect the rescue, disguised as a special envoy of the dreaded Himmler and accompanied by his "mistress." Enmeshed in this complex situation are the activities of Rommel, who sends a Jewish actor (somewhat improbably, also a Wehrmacht corporal) to impersonate him on an "inspection tour" of Jersey's defenses, while he secretly meets with other top generals bent on assassinating the fuhrer. Caught up in the deadly game of "who's-fooling-whom and for how long?" are an amorous Italian count, a Finnish air ace and a hero of the Irish cause, while in the background loom Eisenhower and Hitler himself. Speed, surprise and suspense are Higgins's long suit, rather than convincing characterization, but engrossed readers are not likely to mind. Paperback rights to Pocket Books; Reader's Digest and Condensed Books book club selections; BOMC alternate.
Copyright 1986 Reed Business Information, Inc.

Book Description Pocket, 2009. Condition: Good. Shows some signs of wear, and may have some markings on the inside. Seller Inventory # GRP116157909

Book Description Pocket. Paperback. Condition: GOOD. Spine creases, wear to binding and pages from reading. May contain limited notes, underlining or highlighting that does affect the text. Possible ex library copy, will have the markings and stickers associated from the library. Accessories such as CD, codes, toys, may not be included. Seller Inventory # 2963862817