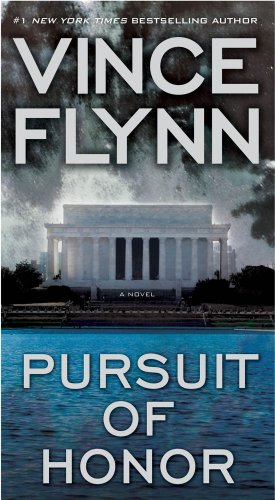 About the Author:
#1 New York Times bestselling author Vince Flynn (1966–2013) created one of contemporary fiction’s most popular heroes: CIA counterterrorist agent Mitch Rapp, featured in thirteen of Flynn’s acclaimed political thrillers. All of his novels are New York Times bestsellers, including his stand-alone debut novel, Term Limits. The Mitch Rapp story begins with American Assassin, followed by Kill Shot, Transfer of Power, The Third Option, Separation of Power, Executive Power, Memorial Day, Consent to Kill, Act of Treason, Protect and Defend, Extreme Measures, Pursuit of Honor, The Last Man, The Survivor, Order to Kill, and Enemy of the State. American Assassin will be released as a major film in 2017.
Excerpt. © Reprinted by permission. All rights reserved.:
CHAPTER 1
NEW YORK CITY

IT was nearing ten o’clock in the evening when Mitch Rapp decided it was time to move. He stepped from the sedan into the April night, popped his umbrella, clutched the collar of his black trench coat, and set out across a rain-soaked East Twentieth Street. He navigated the puddles and swollen gutter without complaint. The weather was a blessing. Not only did it clear the streets of potential witnesses, it also gave him a reasonable excuse to hide his face from the city’s ever-increasing array of security cameras.

Rapp had traveled to New York City to decide the fate of a man. At an earlier point, he had debated the wisdom of handling the situation himself. In addition to the inherent risk of getting caught, there was another, more pressing problem. Just six days earlier a series of explosions had torn through Washington, D.C., killing 185 and wounding hundreds. Three of the terrorists were still at large, and Rapp had been ordered, unofficially, to find them by any means necessary. So far, however, the investigation had been painfully complicated and had yet to yield a single solid lead. The three men had up and disappeared, which suggested a level of sophistication that few of them had thought the enemy capable of. The last thing Rapp expected, though, was that he would still be dealing with this other issue. In light of the attacks in Washington, he thought the fool would have come to his senses.

Beyond the significance of deciding if the man should live or die, there was the aftermath to consider. Killing him had the very real potential to cause more problems than it would solve. If the guy failed to show up for work there would be a lot of questions, and the majority of them would be directed at Rapp and his boss, Irene Kennedy, the director of the Central Intelligence Agency. One tiny misstep, and the shit storm of all shit storms would be brought down on them.

The head of the surveillance team had tried to talk him out of it, but Rapp wasn’t the kind of man who was going to start pulling the trigger from a climate-controlled office a couple hundred miles away. He needed to see with his own eyes if they were missing something—if there wasn’t some unseen or unpredictable factor that had caused the bureaucrat to jump the tracks. Rapp was keenly aware of the universal disdain for the man he had followed to New York. There were plenty of people on the clandestine side of the business who had cause to wish the prick dead, and that was another reason Rapp needed to be absolutely certain he was guilty of what they suspected. His dislike for the man would make it all that much easier to pull the trigger, and Rapp knew he had to fight that urge. He needed to give this idiot every last chance to save himself before they did something that could never be undone.

It would be a mistake to read too deeply into Rapp’s cautious attitude, though. If he found the proof he was looking for, there would be no hand-wringing or queasiness. He’d killed too many people to begin acting like an amateur, and although the man was a fellow American, he was also very likely a traitor. And not some low-level, paper-pushing traitor, this guy had one of the highest security clearances in the federal government and his hypocrisy had likely gotten one of Rapp’s agents killed.

Rapp moved down the sidewalk toward Park Avenue at a casual pace. He was dressed in a fashion similar to that of the thousand-plus executive car drivers who were shuffling their clients around the city on this rain-soaked evening—black shoes, black suit, white shirt, black tie, and a black trench coat. To anyone who happened to notice him, he would look like just another driver out stretching his legs, trying to kill a little time before his client finished his meal and was ready to head someplace else or call it a night.

As Rapp took up a position across the street and one door down from the Gramercy Tavern, he reached into his pocket and fished out a pack of Marlboros. Standing in the rain in New York City doing nothing might get you noticed, but throw in a cigarette and you looked like all the other addicts battling the elements to get their fix. Rapp turned away from the street and faced the blank faÇade of the building behind him. He tilted the umbrella so it looked as if he was trying to block the wind and flicked his lighter. He was not worried about the wind, but he was worried about one of the other drivers’ catching a glimpse of his face in the glow of the flame.

After a deep pull off the cigarette, Rapp casually looked out from under the rain-soaked umbrella and across the street. The target was sitting in one of the restaurant’s big windows sharing a meal, a lot of booze, and too much conversation with a man Rapp had never met, and hoped to keep that way. The other man was a concern, to be sure, but Rapp was not in the habit of killing private citizens simply because they were witnesses to the ramblings of a bitter man who was past his prime.

Despite every effort to find a different solution, Rapp’s mood was decidedly fatalistic. The surveillance team had the restaurant wired for sound, and for the last two hours he had been sitting in a parked Lincoln Town Car listening to his coworker trash-talk the Agency. As Rapp watched him take a drink of wine, he wasn’t sure what bothered him more, the man’s self-serving criticism, or his reckless behavior. One would think that anyone who worked at the CIA would be a little more careful about when and where he decided to commit treason.

So far his associate had done little more than espouse his political and philosophical views. Bad form, to be sure, but nothing that had risen to the level of outright sedition. Rapp, however, could sense that it was coming. The man had been drinking heavily. He’d downed two gin martinis and four glasses of red wine, and that wasn’t counting the bump or two he’d probably had on the flight up from D.C. and possibly at the hotel bar. Rapp had ordered his surveillance people to steer clear of the airports. There were too many cameras and trained law enforcement types who would eventually be interviewed by the FBI. If the night went the way it was looking, every moment of this guy’s life would be rewound and scrutinized, and they’d start with that U.S. Airways commuter flight he’d taken out of Reagan National up to LaGuardia earlier in the day.

Rapp casually took another drag from the cigarette and watched as the waiter placed two snifters of cognac in front of the men. A few minutes earlier, Rapp had listened as the other man tried to pass on the after-dinner drink. Rapp got the feeling the man was starting to think the dinner meeting had been a waste of his time. Rapp’s coworker, however, insisted that they both have a drink. He told the other man he was going to need it after he heard what he was about to tell him.

Now, with the rain softly pelting his umbrella, Rapp watched the waiter place two snifters on the table. The waiter was still within ear-shot when the man from Langley leaned in and began to tell his story. Rapp heard every word via a wireless earpiece. For the first few minutes it was all innuendo. Rapp’s coworker put his information on the table in a series of hypotheticals, and while Rapp had no doubt that the lawyers at the Justice Department would have found wiggle room in the statements, Rapp saw them as further proof of the man’s reckless intent. Anyone who had been read in at this level of national security knew what could be discussed and what was strictly off limits.

Rapp was in the midst of lighting his second cigarette when the conversation moved from the abstract to the concrete. It started with the specific mention of an operation that was known to only a handful of people, including the president. This is it, he thought to himself. The idiot is really going to do it.

As casually as he could, Rapp brought his eyes back to the big window of the restaurant. There, the two men sat, hunched over the table, their faces no more than a foot apart, one speaking in hushed tones, the other looking more horrified with each word. The classified designations came pouring out in a rapid-fire staccato of dates and targets. One secret after another was tossed onto the pile as if they were inconsequential nuggets of gossip. The breadth of the damage was even worse than Rapp had dared imagine. So bad, in fact, that he began wondering if he shouldn’t simply march across the street, pull out his gun, and execute the idiot on the spot.

As quickly as things had heated up, though, they came to an abrupt halt. Like some belligerent drunk who’d consumed one ounce too much of alcohol, the man from Langley put away his wares and announced that he’d divulged only a fraction of what he knew and that before he said anything further they needed to come to an agreement.

Up until now, Rapp had thought his coworker’s rigid principles had driven him to take this risky step, but as he listened to the two men discuss the financial details of their new relationship, that last shred of grudging respect vanished. Rapp looked through the rain at the traitor and realized that like the hundreds of miscreants who had gone before him, his coworker’s often-flaunted idealism came with a price, just as with all the other bastards.

Rapp flicked his cigarette into the gutter and watched it bob and swirl its way into the sewer. As he turned toward Park Avenue he felt not even the tiniest bit of remorse over what he had just set in motion. Without having to look, he knew that a man bearing a striking resemblance to the traitor was now climbing into the back of a Lincoln Town Car. Every detail had been arranged from the eyeglasses, to the tie, to the hair color—even the black and orange umbrella from the hotel. All that was left for Rapp to do was walk a block and a half and wait for the idiot to come to him.