Items related to Behind the Black Robes: Failed Justice

Behind the Black Robes: Failed Justice 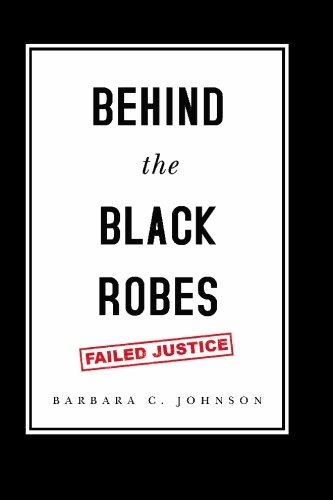 Behind the Black Robes: Failed Justice /is about a very serious problem, the need for court reform and the abolishment of judicial and quasi-judicial immunity. Marinated with the makings of sizzle, the book is filled with the courts' tricks and traps for the unwary---to alert the readers both why their law cases failed and what must be done to effect court reform. Each chapter introduces the background of the subject of that chapter and then presents a series of illustrative anecdotes intended to teach the readers by example how to avoid those court tricks and traps people are likely to encounter in their existing or potential court cases.

Johnson lives life her way. An unconventional 74-year-old, she has long been a fierce advocate for fathers' rights in family courts. She is an outspoken critic of the Massachusetts court system, which she says is rife with corruption. In 2002, she ran a quixotic campaign for governor, campaigning in an antique fire truck and promising to use creativity, compassion, and a willingness to listen to the People to mend an ailing government. In 2006, Johnson was barred from practicing law in Massachusetts. "The disbarment by a kangaroo court was an effort to silence my criticism of the courts," she said, adding laughingly, "I'll have to write a series of judicial murder mysteries and kill off a judge in the prologue of every one." A newspaper wrote, "While we don't fully agree with either her politics or her methods, Johnson is a character in a humdrum world sorely in need of more characters. She's the thorn in the side, the thumbtack on the chair. . . . Johnson speaks her mind, and loudly."

1. Behind the Black Robes: Failed Justice

2. Behind the Black Robes: Failed Justice