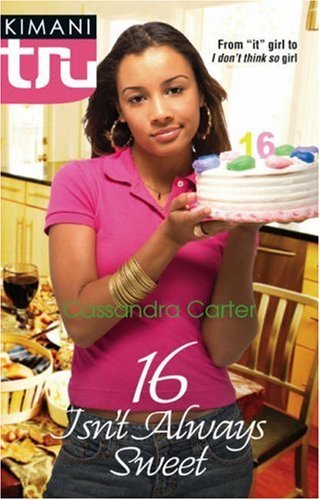 From best friend to frenemy to flat-out enemy

For her Sweet 16, Jordan Wright gets rid of the frizzy hair, the conservative clothes, and finally likes the hip new girl smiling in the mirror. So when she hears about an open casting call for the hottest rapper's new video, she has the confidence to go for it. She and her best friend, Adrienne, try out with hundreds of hopefuls, but only Jordan makes it. Adrienne seems fine with it. But when Jordan starts getting some serious attention, Adrienne turns into a hater. And after Jordan has an innocent in-the-hall conversation with Adrienne's ex-boyfriend—they dated for one week, like four years ago!—Adrienne plots to ruin Jordan's life by spreading rumors, writing stuff on the bathroom walls and telling Jordan she'd be better off dead. Suddenly Jordan's popularity is fading. Forget sweet sixteen. She soon discovers that what she needs most is to find the strength to be herself.

The smoke from all sixteen candles tickled Jordan's nose as she came up from her beautifully decorated birthday cake and into the applause that filled the community center. She couldn't hold back her smile as she took in the cheerful faces around her, and well wishes that swirled around in her head. She was sixteen years old today, and she had been waiting for this moment for as long as she could remember. She was eager to free herself from her parents' rules and take control of her life. This day brought her one step closer to the freedom she craved.

As Jordan's mother took charge and began slicing the cake, hungry guests flocked around the table, giving Jordan a chance to sneak off to the bathroom.

As the door creaked shut behind her, Jordan nearly jumped at the sight of her own reflection. Though her transformation had taken place gradually over the past two weeks, she barely recognized herself. Her gray eyes were no longer shielded by thick lenses. Her metal braces had been removed, and her long black hair had been cut to her shoulders.

Jordan checked herself out in the mirror as she twirled around in the denim Baby Phat dress her parents had finally agreed to buy for her. She had done far too much pleading over the eighty-two-dollar price tag, in her opinion. After all, it was her birthday, and this year she wasn't celebrating just any birthday—this was her sweet sixteen. She had just hit a milestone on the journey to womanhood, and everything had to be absolutely perfect. Or at least as close as she could get it.

She frowned as she looked at her petite figure in the mirror. As badly as she wanted to be a woman, she still felt she lacked certain feminine qualities. She glanced at her breasts as if she could somehow will them to grow. She was already well into her junior year of high school, yet she still hadn't graduated from an A-cup.

Jordan pretended to busy herself with the cat logo pendant hanging from her neck where her cleavage should have been, when a harsh cough interrupted her thoughts. She hadn't even noticed the closed stall upon entry.

The occupant of the stall flung the door open, neglecting to flush the toilet. Jordan turned the water on, letting it flow over her freshly manicured hands.

"What are you doing in here? You scared me! I thought I was in here alone," she remarked as she turned off the faucet and shook her hands dry.

Her best friend, Adrienne, didn't bother to respond as she nudged Jordan away from the sink with her elbow. She let the cold water run for a few moments. Her eyes were shut, and it was clear to see she was exhausted by the way her head hung low. Loose strands from Adrienne's updo tickled her cheeks but stuck to her skin only when she splashed a handful of water on her face.

"I should be asking you the same question. This is your birthday party. Shouldn't you be out there with everybody else?" she asked, holding her hand over her stomach.

"No kidding. I just came in here to catch my breath for a minute, you know? But you can't expect me to go back out there without you. How long have you been in here?"

"Don't be. You just overdid it last night." Jordan was understanding of her friend's hungover condition. She always forgot that her birthday was only one day into the New Year—she anticipated her day more than the holiday.

"Jordan?" Jordan's mother, Olivia, called from the doorway. "Hey, I've been looking all over for you. You don't want any of your cake? I saved you the first piece."

"Is everything okay in here?" her mother asked, obviously concerned. "Adrienne, are you all right?"

"She's fine. We'll be out in a minute," Jordan was quick to reply, and flashed a phony smile.

Jordan nervously watched as the door shut and her mother disappeared. A sigh escaped her and she turned to assess her friend. "So, how do you feel now? Better?"

"Yeah, I think I'm good." Adrienne tucked a few wild strands into the mass of hair on her head and took a deep breath. She gave herself a quick once-over in the mirror before turning her attention back to Jordan. "So, what'd you wish for, birthday girl?"

"I'm not tellin' or else it won't come true! Now come on. But whatever you do, don't you dare throw up on my dress or these shoes," she joked, pointing at her Baby Phat wedge sandals. She'd had to beg her aunt Lisa for them, and Lisa had put up a tougher fight about the money than her own parents had.

Adrienne rolled her eyes back as she pretended to throw up, causing Jordan to giggle. "That's why your breath stank."

"That's why I hope nobody got you a thing!" Adrienne said as she resumed primping in the mirror.

The girls' laughter continued as they rejoined the party. Jordan was glowing as she shuffled through the dancing crowd to where her family was waiting. Her younger brother, Tariq, was only in the first grade, and all they ever did was argue. Now, however, a hug from him upon her arrival lifted her spirits.

Jordan could see the pride in her parents' eyes as they watched her tear at the rainbow of wrapping paper covering presents stacked at least a foot high. Jordan made confetti of the gift wrap as she hummed the song the DJ was spinning in the background.

Half an hour later, she had received several gift cards, two Southpole outfits, body sprays with matching lotions and body washes from Bath & Body Works, and more than a dozen CDs. Now all that was left in her hands was one sizable box. Jordan was beaming. She couldn't wait to see what was in store for her.

Book Description Paw Prints 2008-06-26, 2008. Library Binding. Condition: Fair. A readable copy. All pages are intact, and the cover is intact. Pages can include considerable notes-in pen or highlighter-but the notes cannot obscure the text. An ex-library book and may have standard library stamps and/or stickers. At ThriftBooks, our motto is: Read More, Spend Less. Seller Inventory # G1439500797I5N10