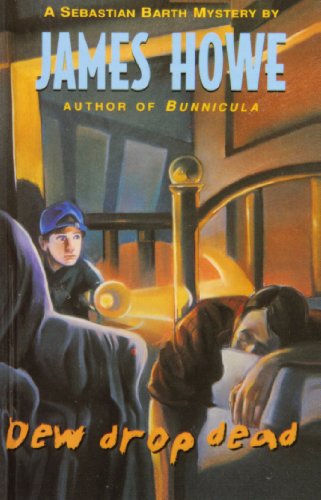 FOR USE IN SCHOOLS AND LIBRARIES ONLY. Amateur sleuth Sebastian Bach is back, as he and his friends discover a body while exploring the boarded-up Dew Drop Inn, but the body disappears by the time the police arrive.

Snooping around the mysteriously abandoned Dew Drop Inn, Sebastian Barth and his best friends, David Lepinsky and Corrie Wingate, are startled to come upon what they are certain is a dead body. Sebastian is the first to put into words what they all believe: A murder has been committed.

When they return with the police, however, the body is gone! "A homeless man sleeping off a drink," is the police chief's explanation. But Sebastian and his friends are not ready to believe that. They are sure the body they saw was dead, not unconscious.

As the three undertake their own further investigation, more and more questions arise: Who was the man? Was he alone? And most important of all, is there a connection between the man they saw and one or more of the homeless people Corrie's father, a minister, is trying to help? The answers to the questions do not come until the three have made a number of discoveries, some of them more horrifying than they had expected.

Dew Drop Dead is the fourth mystery in the Sebastian Barth series. Using rural Connecticut as a background, this tension-filled story is told with a unique blend of humor and seriousness, as it unravels a challenging puzzle and explores a difficult social problem.

James Howe JAMES HOWE began his writing career with Bunnicula, which was published in 1979. This book and the next, Teddy Bear's Scrapbook, were coauthored with his late wife, Deborah. Bunnicula went on to receive numerous awards as a favorite among children in the United States and Canada. It was also made into a popular television special. In 1982 and 1983, two sequels to Bunnicula, Howliday Inn and The Celery Stalks at Midnight, appeared. Howe is also the author of The Hospital Book, A Night Without Stars, Morgan's Zoo, What Eric Knew, and Stage Fright.

Book Description Library Binding. Condition: GOOD. Spine creases, wear to binding and pages from reading. May contain limited notes, underlining or highlighting that does affect the text. Possible ex library copy, will have the markings and stickers associated from the library. Accessories such as CD, codes, toys, may not be included. Seller Inventory # 3196837963

Book Description 2008. Condition: Good. A+ Customer service! Satisfaction Guaranteed! Book is in Used-Good condition. Pages and cover are clean and intact. Used items may not include supplementary materials such as CDs or access codes. May show signs of minor shelf wear and contain limited notes and highlighting. Seller Inventory # 1439527865-2-4