Items related to Pastwatch: The Redemption of Christopher Columbus

Pastwatch: The Redemption of Christopher Columbus 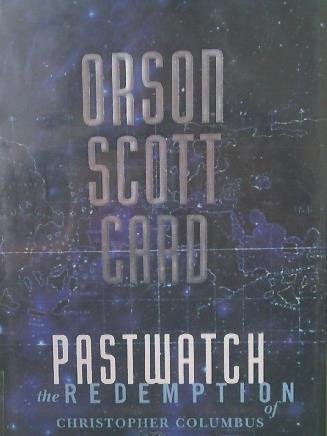 In a not-too-distant future that is not quite ours, there has been a major scientific breakthrough, a way to open windows into the past, permitting historical researchers to view but not participate in the events of the past.

In one of the most powerful and thought-provoking novels of his remarkable career, Orson Scott Card interweaves a compelling portrait of Christopher Columbus with the story of a future scientist who believes she can alter human history from a tragedy of bloodshed and brutality to a world filled with hope and healing.

Anyone who's read Lies My Teacher Told Me : Everything Your American History Textbook Got Wrong knows about the devastating consequences that Columbus's voyage and ensuing colonization had on the native people of the Americas and Africa. In a thought-provoking work that is part science fiction, part historical drama, Orson Scott Card writes about scientists in a fearful future who study that tragic past, then attempt to actually intervene and change it into something better.

Tagiri and Hassan are members of Pastwatch, an academic organization that uses machines to see into the past and record it. Their project focuses on slavery and its dreadful effects, and gradually evolves into a study of Christopher Columbus. They eventually marry and their daughter Diko joins them in their quest to discover what drove Columbus west.

Columbus, with whom readers become acquainted through both images in the Pastwatch machines and personal narrative, is portrayed as a religious man with both strengths and weaknesses, a charismatic leader who sometimes rose above but often fell beneath the mores of his times. As usual, Orson Scott Card uses his formidable writing skills to create likable, complex characters who face gripping problems; he also provides an entertaining and thoughtful history lesson in Pastwatch. --Bonnie Bouman

ORSON SCOTT CARD, the author of the New York Times bestseller Ender's Game, has won several Hugo and Nebula awards for his works of speculative fiction. His 'Ender' novels are widely read by adults and younger readers and are increasingly used in schools. Besides these and other science fiction novels, Card writes contemporary fantasy, biblical novels, the American frontier fantasy series' The Tales of Alvin Maker', poetry, and many plays and scripts. He currently lives in Greensboro, North Carolina, with his family.

1. Pastwatch: The Redemption of Christopher Columbus

Book Description Paw Prints, 2008. Condition: Good. Reissue. Shows some signs of wear, and may have some markings on the inside. Seller Inventory # GRP111393166

2. Pastwatch: The Redemption of Christopher Columbus

Book Description Library Binding. Condition: Fair. A readable copy. All pages are intact, and the cover is intact. Pages can include considerable notes-in pen or highlighter-but the notes cannot obscure the text. An ex-library book and may have standard library stamps and/or stickers. At ThriftBooks, our motto is: Read More, Spend Less. Seller Inventory # G1439568146I5N10

3. Pastwatch: The Redemption of Christopher Columbus

4. Pastwatch: The Redemption of Christopher Columbus

Book Description 2008. Condition: Good. A+ Customer service! Satisfaction Guaranteed! Book is in Used-Good condition. Pages and cover are clean and intact. Used items may not include supplementary materials such as CDs or access codes. May show signs of minor shelf wear and contain limited notes and highlighting. Seller Inventory # 1439568146-2-4