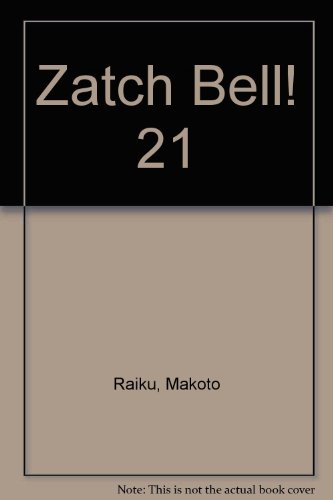 Courage, friendship, and adventure meet when high school student Kiyo and Zatch Bell, a strange boy with magical powers, team up to win the ultimate battle. Zatch, Kiyo, Parco Folgore and Kanchome continue their heated battle with the cigar-chomping mamodo Keith, and things aren't looking pretty. Keith has vowed to finish the fight before his cigar is done, and now Kanchome's only hope for survival rests on a new spell that has the potential to literally multiply his power. But will this new ability simply create a host of cowardly Kanchomes, or will this timid mamodo finally find the courage to stand up to his rivals?

Makoto Raiku was born in Japan's Gifu prefecture and made his manga debut in 1991 with Bird Man. He won Shogakukan's 48th Manga Taisho award with Zatch Bell!

Book Description Paw Prints, 2009. Condition: Good. A+ Customer service! Satisfaction Guaranteed! Book is in Used-Good condition. Pages and cover are clean and intact. Used items may not include supplementary materials such as CDs or access codes. May show signs of minor shelf wear and contain limited notes and highlighting. Seller Inventory # 1439575878-2-4