Items related to Dead Is a State of Mind

Perez, Marlene Dead Is a State of Mind

Dead Is a State of Mind 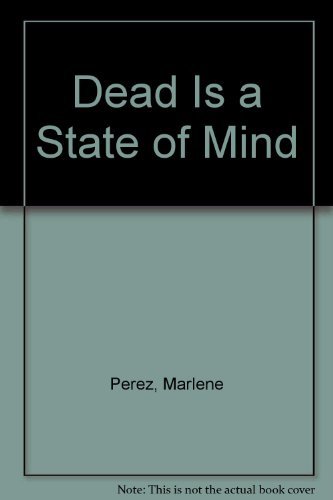 Welcome to Nightshade, California—a small town full of secrets. It’s home to the psychic Giordano sisters, who have a way of getting mixed up in mysteries. During their investigations, they run across everything from pom-pom- shaking vampires to shape-shifting boyfriends to a clue-spewing jukebox. With their psychic powers and some sisterly support, they can crack any case!

There’s a gorgeous new guy at Nightshade High: Duke Sherrad, a fortune-teller claiming to have descended from Gypsies. Even though she’s psychic herself, Daisy is skeptical of Duke’s powers. But when a teacher who was the subject of one of his predictions ends up dead, she begins to wonder if Duke is the real deal after all.
Maybe if Daisy can track down the teacher’s killer, she can find out the truth. The only trouble is, all signs point to the murderer being of the furry persuasion. Is Daisy any match for a werewolf? Maybe she is . . . in more ways than she bargained for!

Marlene Perez is the author of seven books in the Dead Is Series, including Dead Is The New Black, an ALA Quick Pick for Reluctant Young Adult Readers. She lives in Orange County, California.Visit her website at www.marleneperez.com.

I was running late. So late, in fact, that I didn’t watch where I was going and slammed into someone walking out of the school office as I ran by."Ooph!" he said as my elbow jabbed into rock-hard abdominal muscles."I am so sorry!" I said. I’d almost knocked over a stranger. An extremely handsome stranger who stood there smiling at me, despite the fact that I’d almost flattened him in my hurry to get to chemistry class."Do not worry," he said with a heavy accent I couldn’t place. "It is a pleasure to run into someone as beautiful as you on my first day."He was dressed in a deep blue silk shirt, form-fitting black jeans, and boots. His spiky hair was really black, like someone had overturned an inkwell on his head. His long lashes framed incredible blue eyes."You’re new here?" I said, stating the obvious. I knew practically everybody at Nightshade High and besides, it wasn’t exactly swarming with gorgeous new students."I am Dukker Sherrad," he said, "but my friends call me Duke." He took my hand and held it longer than strictly necessary."Hi," I said.He looked at me questioningly. I seemed to have forgotten my name as well as my manners."I’m Daisy Giordano," I finally said. I paused for a minute, waiting for recognition to set in, then felt like an idiot when my last name garnered only polite interest instead of the usual curiosity. You see, my mom is a psychic. She solves crimes all over the world using her powers. She wasn’t exactly famous yet, but she’d been in the news plenty of times and I was getting used to people recognizing the name.I blushed, amused at my overinflated sense of self-worth. "Welcome to Nightshade," I said.Samantha Devereaux walked up as we stood there. She was blond, gorgeous, and the head cheerleader. She was also kind of a friend. Earlier in the school year, Sam had gone through a queen of the damned look, but that, thankfully, was over. She was wearing jeans I was sure would soon become all the rage and what looked like her boyfriend Sean’s button-down shirt over a lacy camisole. It was outfits like this that earned her the nickname the Divine Devereaux.I dropped Duke’s hand. Quickly, but not quickly enough."Daisy, aren’t you forgetting someone?" Samantha said pointedly. Remarks like this were why she was only kind of a friend. I thought I could be sarcastic, but I bowed before the master."What?" I was still staring into Duke’s eyes, almost against my will."Ryan Mendez. Your boyfriend. He’s waiting for you by your locker," she said.Ryan. Oh my gosh! "I was supposed to meet him before class!" I said."I was hoping you would be available to show me around the school," Duke said."I’ve got to run," I said, "but this is Samantha Devereaux. I’ll leave you in her capable hands."As I left, Samantha said something to Duke I couldn’t hear, and he laughed, dimples flashing. I felt a slight pang at leaving such a cutie behind, but another cutie waited for me.I bolted to my locker, where Ryan was, as Samantha reported, waiting patiently."I’m so sorry!" I said. "I’m running late as usual."Ryan leaned in for a quick kiss. "I don’t mind waiting for you."I smiled up at him. Maybe things between us were finally returning to normal. He’d been broody and distracted lately. He told me that he had been arguing with his dad a lot, which was odd since they had always been so close. I guessed it was because his dad could be strict at times after all, he was the chief of police in Nightshade.Broody or not, Ryan Mendez was the cutest boy in school (I pushed the memory of the gorgeous new guy out of my mind), played varsity in every sport the school had to offer, and was generally considered to be a catch by the girls at Nightshade High.They also considered it a complete mystery that he wanted to be with me. I wasn’t part of the popular crowd, although I’d been a cheerleader for about ten seconds back in the fall.The warning bell rang, and we hurried to our classes. Ryan and I had P.E. together last period, but that was about it.By fourth period everyone was gossiping about the new guy. Copyright © 2009 by Marlene PerezAll rights reserved. Published in the United States by Graphia, an imprint of Houghton Mifflin Harcourt Publishing Company, Boston, Massachusetts.Requests for permission to make copies of any part of the work should be submitted online at www.harcourt.com/contact or mailed to the following address: Permissions Department, Houghton Mifflin Harcourt Publishing Company, 6277 Sea Harbor Drive, Orlando, Florida 32887-6777.