Items related to The Future in America: A Search After Realities (Classic...

Wells, H. G. The Future in America: A Search After Realities (Classic Reprint)

The Future in America: A Search After Realities (Classic Reprint) 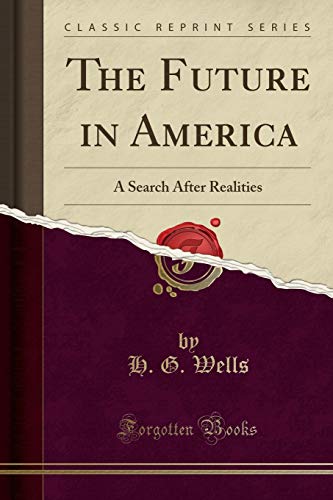 CHAPTER I
the PEOPnETIC habit of mind § 1
[At a Writing-desk in Sandgate in April, 1006.']
"Are you a Polygamist ? "
" Are you an Anarchist ? "
The questions seem impertinent. They are part of a long paper of interrogations I must answer satisfactorily if I am to be regarded as a desirable^ alien to enter the United States of America. < I want very much to pass that great statue of Liberty illuminating the world (from a central position in New York Harbour) in order to see things in its light, to talk to certain people, to appreciate certain atmospheres,! and so I resist the provocation to answer imp< rtiiuntlj. I do not even volunteer that I do not smoke Ld am a total abstainer, on which point?! it would seem, the States as a whole still pen mind. I am full

Forgotten Books' Classic Reprint Series utilizes the latest technology to regenerate facsimiles of historically important writings. Careful attention has been made to accurately preserve the original format of each page whilst digitally enhancing the difficult to read text. Read books online for free at www.forgottenbooks.org

Often called the father of science fiction, British author Herbert George (H. G.) Wells literary works are notable for being some of the first titles of the science fiction genre, and include such famed titles as The Time Machine, The War of the Worlds, The Island of Doctor Moreau, and The Invisible Man. Despite being fixedly associated with science fiction, Wells wrote extensively in other genres and on many subjects, including history, society and politics, and was heavily influenced by Darwinism. His first book, Anticipations of the Reaction of Mechanical and Scientific Progress Upon Human Life and Thought, offered predictions about what technology and society would look like in the year 2000, many of which have proven accurate. Wells went on to pen over fifty novels, numerous non-fiction books, and dozens of short stories. His legacy has had an overwhelming influence on science fiction, popular culture, and even on technological and scientific innovation. Wells died in 1946 at the age of 79.

1. The Future in America: A Search After Realities (Classic Reprint)