Items related to A History of Freedom of Thought (Classic Reprint)

Bury, J. B. A History of Freedom of Thought (Classic Reprint)

A History of Freedom of Thought (Classic Reprint) 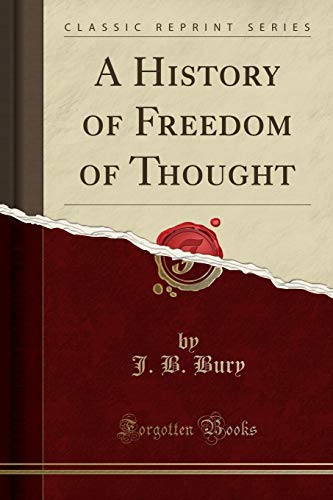 The working of his mind is limited only by the bounds of his experience and the power of his imagination. But this natural liberty of private thinking is of little value. It is unsatisfactory and even painful to the thinker himself, if he is not permitted to communicate his thoughts to others, and it is obviously of no value to his neighbours. More over it is extremely difficult to hide thoughts that have any power over the mind.
(Typographical errors above are due to OCR software and don't occur in the book.)

Forgotten Books' Classic Reprint Series utilizes the latest technology to regenerate facsimiles of historically important writings. Careful attention has been made to accurately preserve the original format of each page whilst digitally enhancing the aged text. Read books online for free at www.forgottenbooks.org

Humanity has always enjoyed freedom of thought--but the freedom to express those thoughts, however radical, however threatening to authority, is one that, as J. B. Bury's explains in this 1913 work, "has been acquired only in quite recent times, and the way to its attainment has lain through lakes of blood."

In this entertaining and highly accessible history of speaking our minds without fear of retribution, Bury explores the concept of civic free thought from ancient Greece and Rome, where a strongly secular society bred open minds, through the constraints of the Mediaeval period and the re-blossoming of intellectualism in the Renaissance, to the scientific rationalism of the 19th century.

British historian JOHN BAGNELL BURY (1861-1927) was professor of modern history at Cambridge. His writings, known for a readability combined with a scholarly depth, include History of the Later Roman Empire (1889), History of Greece (1900), and Idea of Progress (1920).