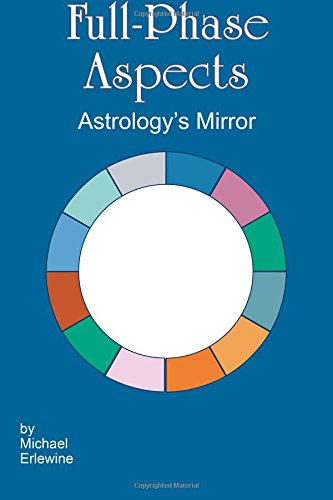 The heart of modern astrology is all about aspect between the Sun, Moon, and planets, a technique passed down from the ancient Greeks. All astrologers use aspects. What is not so well understood is the importance of looking at both right and left-handed aspects, what are called full-phase or mirror aspects. A right-handed or separating Square aspect is not the same as a left-handed or applying Square aspect, just as we discriminate between a First Quarter and Fourth Quarter Moon and should be interpreted differently. Championed by astrologers like Dane Rudhyar and L. Edward Johndro, mirror aspects have until now never been fully utilized by counseling astrologers. Here is this powerful counseling technique made easy and fully illustrated (145 color illustrations), complete with detailed interpretations written by Michael Erlewine. 191 pages, 145 illustrations..

Internationally-known astrologer and author Noel Tyle (over 34 astrological textbooks to his credit), had this to say about Michael Erlewine and his influence on modern astrology: "Michael Erlewine is the giant influence whose creativity is forever imprinted on all astrologers' work since the beginning of the Computer era! He is the man who single-handedly applied computer technology to astrological measurement, research, and interpretation. He founded MATRIX software long ago, and from crucial algorithms to interpretation zenith, Erlewine has been the formative and leading light of astrology's modern growth. After inventing the technological applications, Erlewine humanized it all, adding perception and incisive practical analyses to modern, computerized astrology. Now, for a second generation of astrologers and their public, Erlewine's genius continues with StarTypes ... and it's simply amazing!" Michael Erlewine Michael Erlewine is an internationally known, award-wining, astrologer, with over 40 years of experience in astrology. In 1977, Erlewine was the first astrologer to program astrology on microcomputers and make these programs available to the general public. His founded Matrix Software in 1978, which, along with a little company called Microsoft are the two oldest software companies on the Internet still in existence. Michael Erlewine has written many books and numerous articles on astrology and has been published in the most prestigious astrological journals and publications. Erlewine taught astrology for many years and has done one-on-one personal astrological readings or consultations for more than 30 years. Erlewine has introduced many new astrological techniques to astrologers, including Local Space relocation, heliocentric techniques, deep-space astrology, and many others. His books astrology books include Astrophysical Directions, The Sun is Shining, Interface: Planetary Nodes, and Manual of Computer Programming for Astrologers. Among other things Erlewine, with the staff at his company Matrix Software, introduced the first computer-generated astrology reports, the first research oriented software, the first relocation software for home computers, the first on-screen hi-resolution graphics astrologer, first deep-space maps and astrology, and much more. Contact: Michael@erlewine.net.