Items related to The Man Who Was Thursday: 100Th Anniversary Edition

The Man Who Was Thursday: 100Th Anniversary Edition 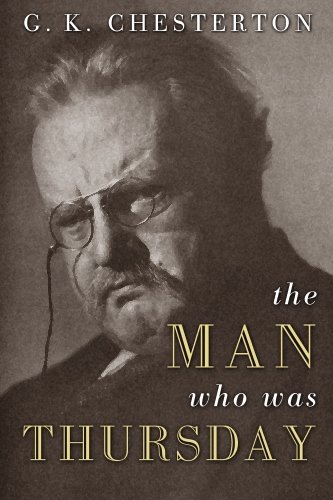 G. K. Chesterton's masterpiece, "The Man Who Was Thursday," is one of the great suspense stories of all time. By turns hilarious, insightful, mystical, and spine-tingling, it has thrilled and delighted readers for one-hundred years. This special centennial edition features a fresh design, printed on high quality paper, in a large format (6"x9").

In an article published the day before his death, G.K. Chesterton called The Man Who Was Thursday "a very melodramatic sort of moonshine." Set in a phantasmagoric London where policemen are poets and anarchists camouflage themselves as, well, anarchists, his 1907 novel offers up one highly colored enigma after another. If that weren't enough, the author also throws in an elephant chase and a hot-air-balloon pursuit in which the pursuers suffer from "the persistent refusal of the balloon to follow the roads, and the still more persistent refusal of the cabmen to follow the balloon."

But Chesterton is also concerned with more serious questions of honor and truth (and less serious ones, perhaps, of duels and dualism). Our hero is Gabriel Syme, a policeman who cannot reveal that his fellow poet Lucian Gregory is an anarchist. In Chesterton's agile, antic hands, Syme is the virtual embodiment of paradox:

He came of a family of cranks, in which all the oldest people had all the newest notions. One of his uncles always walked about without a hat, and another had made an unsuccessful attempt to walk about with a hat and nothing else. His father cultivated art and self-realization; his mother went in for simplicity and hygiene. Hence the child, during his tenderer years, was wholly unacquainted with any drink between the extremes of absinthe and cocoa, of both of which he had a healthy dislike.... Being surrounded with every conceivable kind of revolt from infancy, Gabriel had to revolt into something, so he revolted into the only thing left--sanity.

Elected undercover into the Central European Council of anarchists, Syme must avoid discovery and save the world from any bombings in the offing. As Thursday (each anarchist takes the name of a weekday--the only quotidian thing about this fantasia) does his best to undo his new colleagues, the masks multiply. The question then becomes: Do they reveal or conceal? And who, not to mention what, can be believed? As The Man Who Was Thursday proceeds, it becomes a hilarious numbers game with a more serious undertone--what happens if most members of the council actually turn out to be on the side of right? Chesterton's tour de force is a thriller that is best read slowly, so as to savor his highly anarchic take on anarchy. --Kerry Fried From the Inside Flap:

G. K. Chesterton's surreal masterpiece is a psychological thriller that centers on seven anarchists in turn-of-the-century London who call themselves by the names of the days of the week. Chesterton explores the meanings of their disguised identities in what is a fascinating mystery and, ultimately, a spellbinding allegory. As Jonathan Lethem remarks in his Introduction, The real characters are the ideas. Chesterton's nutty agenda is really quite simple: to expose moral relativism and parlor nihilism for the devils he believes them to be. This wouldn't be interesting at all, though, if he didn't also show such passion for giving the devil his due. He animates the forces of chaos and anarchy with every ounce of imaginative verve and rhetorical force in his body.