Items related to Mighty Hammer Down 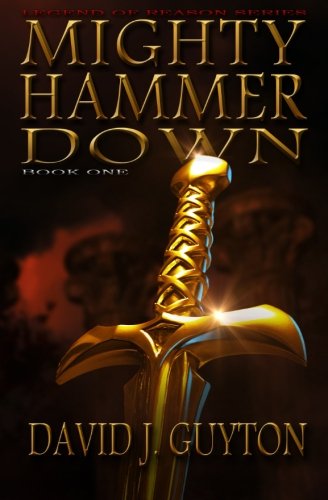 A longstanding peace is about to be shattered by villains in the shadows of Medora. They conspire with distant nations to cripple the western Empire. In their secretive attempt, they stumble across the power to slay Arius, the god of war, and replace him with a human puppet. But that mission fails, and they not only pave the path for the seven gods to walk the earth, but create a god of war who is bent on their destruction. In the chaos, a great war ignites and threatens all nations and cultures. Great beasts now walk the earth again, and the gods themselves have come down to influence the world of man once more. But the new god of war joins the battle on the Vindyri planes, fighting with all his might for the freedom of mankind, struggling to bring light to the coming darkness.

David J. Guyton is a fantasy novelist and artist living in the Eastern United States.

Book Description CreateSpace Independent Publishing Platform. Paperback. Condition: Very Good. A copy that has been read, but remains in excellent condition. Pages are intact and are not marred by notes or highlighting, but may contain a neat previous owner name. The spine remains undamaged. An ex-library book and may have standard library stamps and/or stickers. At ThriftBooks, our motto is: Read More, Spend Less. Seller Inventory # G1440486077I4N10