Items related to The Politics of Literature in Nazi Germany: Books in...

Barbian, Jan-Pieter The Politics of Literature in Nazi Germany: Books in the Media Dictatorship

The Politics of Literature in Nazi Germany: Books in the Media Dictatorship 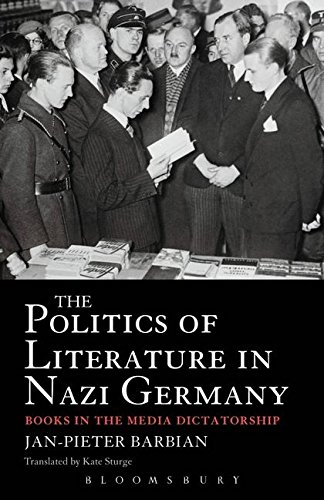 This is the most comprehensive account to date of literary politics in Nazi Germany and of the institutions, organizations and people who controlled German literature during the Third Reich. Barbian details a media dictatorship-involving the persecution and control of writers, publishers and libraries, but also voluntary assimilation and pre-emptive self-censorship-that began almost immediately under the National Socialists, leading to authors' forced declarations of loyalty, literary propaganda, censorship, and book burnings. Special attention is given to Nazi regulation of the publishing industry and command over all forms of publication and dissemination, from the most presitigious publishing houses to the smallest municipal and school libraries. Barbian also shows that, although the Nazis censored books not in line with Party aims, many publishers and writers took advantage of loopholes in their system of control. Supporting his work with exhaustive research of original sources, Barbian describes a society in which everybody who was not openly opposed to it, participated in the system, whether as a writer, an editor, or even as an ordinary visitor to a library.

Professor Jan-Pieter Barbian is a historian and Director of Duisburg Municipal Library, Germany. He is a leading expert on Nazi literary politics and cultural policy. He is the author of Literaturpolitik im Dritten Reich (1993) and Die vollendete Ohnmacht (2008) and is a member of Historische Kommission des Börsenvereins für den deutschen Buchhandel.

Kate Sturge holds a Chartered Institute of Linguists' Diploma in Translation (German-English) and a PhD in Comparative Literature. She is co-editor of the Routledge journal Translation Studies. Her translations include Friedrich Nietzsche: Writings from the Late Notebooks (ed. Rüdiger Bittner, Cambridge University Press, 2002).

Barbian provides fascinating new insights into the motives behind the media dictatorship and the motivations for participation in it. The book thus makes a significant contribution to research into the politics of literature under National Socialism * Forum for Modern Language Studies, vol. 50 *

1. Politics of Literature in Nazi Germany, The

2. The Politics of Literature in Nazi Germany: The Book and the Media Dictatorship