Items related to Can I Get A Witness?: 21 Frustrations of Black Women...

Zimmerman, Mikki C Can I Get A Witness?: 21 Frustrations of Black Women (Including Me)

Can I Get A Witness?: 21 Frustrations of Black Women (Including Me) 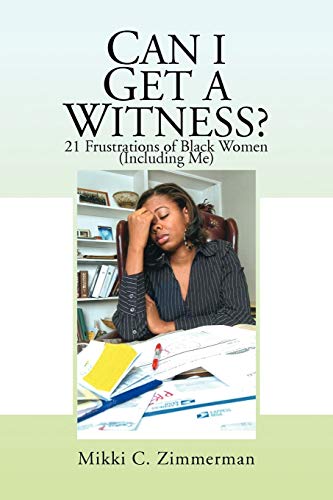 With prejudice and racial injustice still rampant in society, black women have reasons to be angry and frustrated.  An engaging discussion about the concerns and views of black women awaits readers in Can I Get a Witness?  21 Frustrations of Black Women (Including Me).

In the book, Mikki attempts to rescue and restore the tarnished image of black women by shattering the negative and stereotypical myths that are widely associated with women of color.  Can I Get a Witness? Offers readers an in-depth examination on the circumstances that cause black women to be angry and upset about the way they are treated in society as well as how their situations fare with other women.  It exposes many varied reasons that make black womens lives depressing such as discrimination on race, social inequalities, lack of opportunities, dictation from the status quo, and more.  Filled with logic and philosophy, this book's discussion will remind readers why African-American women deserve attention and care.

Created from the compelling testimonies of frustrated black women worldwide, Can I Get a Witness? will enlighten, encourage, and entertain readers from start to finish!

Since its inception in April 2008, her syndicated column -"Back and Forth with Mikki"- has gotten rave reviews from readers.  It is said to be "frank and straight to the point" but not "critical and judgmental in nature".  In the column, Mikki covers an array of topics that are critical to the African-American community.

As a social activist, Mikki has served as volunteer reader from 1992-2000 with the "Read-A-Round Program" of the Ouachita Parish School System, a cook and server with the Homeless Ministry (New Tabernacle Baptist Church), and can-goods collector for needy families throughout Monroe, LA with the Boy Scouts of America - Top Gun Troop 65.

She is an avid sports fan who whole-heartedly supports the New Orleans Saints, Hornets and the Neville High School Football team where her son, DeAndre', is the starting quarterback.  She resides in Monroe, LA with her family.

6. Can I Get A Witness?: 21 Frustrations of Black Women (Including Me)