Items related to The Venetian Tiara 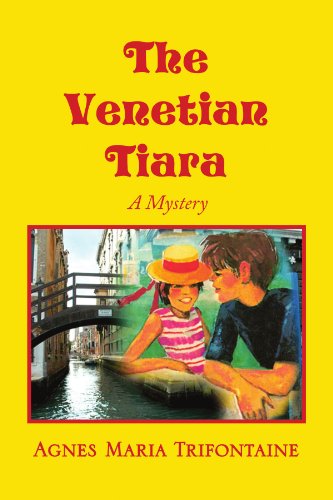 In the third book of the mystery series by Agnes Maria Trifontaine we meet Andy, Gitta s cousin. Andy hates Venice, one of the most beautiful cities in the world, because he had very different plans. Meeting an extraordinary boy, who turns out to be a girl, opens his eyes. Gina is the perfect guide to introduce him to the wonders and magic of her city. But who is Gina? A duchess? A tourist guide? A gondolier? And who is the mysterious stranger with a face like a pirate? Is the famous tiara in danger of being lost? Will the family of di Monteverdo survive without it? These and other questions have to be answered. Andy turns detective, like his cousin, to do so. However, being arrested is not part of the plan. Read about the amazing discoveries Andy makes and about the wonderful solution to a heartbreaking problem. Keep your eyes peeled for the new installment to the series, Arrest That Ghost, which brings all the characters together at an ancient castle. Do ghosts exist and are they dangerous? Finding the answer to this question takes some expert detective work. Pompom investigates with the help of her friends.

My life has given me many rich experiences relevant to my career as a writer. I was born in Aachen, Germany, in 1939, in a family very opposed to the political developments of the time. This created a sense of bewilderment and complexity right from the beginning and gave me a philosophical perspective on life that has stayed with me. This led to an interest in writing, and I published six children's novels in German by the time I reached my early twenties. At about the same time I married an American and because of my husband's employment as an international banker, I spent much time in Dear Ms. Fitz, The characters in my children's books are universally independent, strong-willed and confident. They are often contrarians and, naturally, have to learn a lesson, so they can add modesty or compassion to their list of characteristics. The stories draw on my own experiences, or those of my children. I grew up in Aachen, Germany, in 1939. Having been born at such a time set the stage for a continuous inner search in a chaotic world. This led to a promising start as author of children's novels which were published in Germany. For years I lived in the Far East, Singapore, Tokyo and Hong Kong and visited other countries in the Orient. The different cultures and how they affected me and my family further influenced my work. I have completed two detective novels for girls 8-12 in a series I plan to continue, each story taking place in a different environment. The first one happens in Munich, the second in Prague, Czechia. The books all have a 'musical note', since they revolve around Gitta's stepfather who is a musician and travels the world, often inviting Gitta and her sidekick, Pompom, along. I have also written ten manuscripts for picture books, some of them with a large element of fantasy, and others dealing with the daily events that so often leave marks on children's psyches. I have worked extensively with children, as a teacher as well as LMSW,

1. The Venetian Tiara : A Mystery

Book Description Xlibris Corporation LLC. Paperback. Condition: Good. A copy that has been read, but remains in clean condition. All pages are intact, and the cover is intact. The spine may show signs of wear. Pages can include limited notes and highlighting, and the copy can include previous owner inscriptions. At ThriftBooks, our motto is: Read More, Spend Less. Seller Inventory # G1441559817I3N00

Book Description Xlibris Corporation, 2009. Condition: Good. A+ Customer service! Satisfaction Guaranteed! Book is in Used-Good condition. Pages and cover are clean and intact. Used items may not include supplementary materials such as CDs or access codes. May show signs of minor shelf wear and contain limited notes and highlighting. Seller Inventory # 1441559817-2-4