Items related to The Hollywood Studios: House Style in the Golden Age...

Ethan Mordden The Hollywood Studios: House Style in the Golden Age of the Movies

The Hollywood Studios: House Style in the Golden Age of the Movies 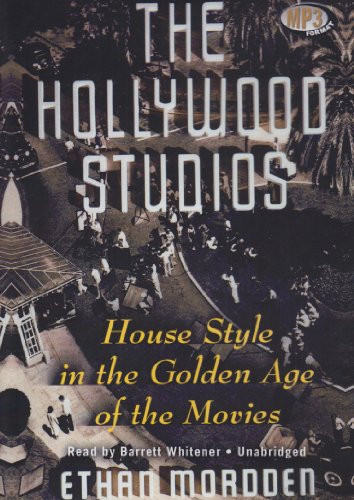 Hollywood in the years between 1929 and 1948 was a town of moviemaking empires. The great studios were estates of talent: sprawling, dense, diverse. It was the Golden Age of the Movies, and each studio made its distinctive contribution. But how did the studios, ''growing up'' in the same time and place, develop so differently? What combinations of talents and temperaments gave them their signature styles? These are the questions Ethan Mordden answers, with breezy erudition and irrepressible enthusiasm, in this fascinating and wonderfully readable book. Mordden illuminates how the style of each studio was primarily dictated by the personality, philosophy, and attitudes of its presiding mogul--and how all these factors affected the work and careers of individual actors, directors, writers, and technicians, and the success of the studio in general.

ETHAN MORDDEN has written extensively for the New Yorker and the New York Times. Besides non-fiction on theatre, music, and film, he is the author of the Buddies cycle of short stories. The stories, adapted for the stage by Scott Edward Smith as Buddies, played an engagement at the Celebration Theater in Los Angeles. His most recent novel is The Jewcatcher, a savage black-comic fantasy on life in Nazi Germany.

In this critical history, Mordden examines how the Hollywood studio system affected the nature and quality of mainstream film making. Much film writing is either sappy or esoteric, but this book is accessible, well written, humorous and informed. Barrett Whitener is brisk and crisp--as always, a delight to listen to. Adams. Y.R. (c)AudioFile, Portland, Maine

1. The Hollywood Studios: House Style in the Golden Age of the Movies: Library Edition