Items related to The Gods of Mars (The Martian-Barsoom-John Carter Series,... 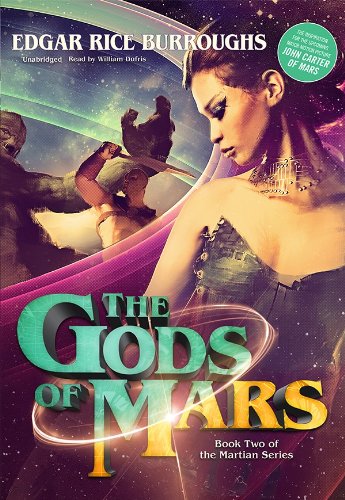 This is Book 2 in Edgar Rice Burroughs' Martian Series, also known as the Barsoom Series.

This is the extraordinary story of John Carter, who returns to the Red Planet in search of his beloved, Dejah Thoris. John lands in the Valley Dor, which is populated by vicious plant men, and discovers the Lost Sea of Korus, guarded by the great white apes and horrifying lions of Barsoom. It is here that he finds the princess Thuvia, who is a captive of the Holy Therns, high priests who eat only human flesh slain by their plant men. But this is only the beginning of John Carter's adventures under the double moons of Mars before he fights his way back to his own people as the Prince of the House of Tardos Mors.

EDGAR RICE BURROUGHS (1875-1950), born in Chicago, was educated at several schools, including the Michigan Military Academy, and served briefly in the U.S. Cavalry. He began writing while working as a pencil-sharpener salesman, publishing his first piece in 1911 to great success. He authored numerous science fiction and fantasy series but is most famous for his Tarzan books. The suburb of Los Angeles where he lived eventually became known as Tarzana in his honor.