Items related to Poems of a Heart Held Captive: Poems From the Heart...

Poems of a Heart Held Captive: Poems From the Heart and Stories for Your Soul 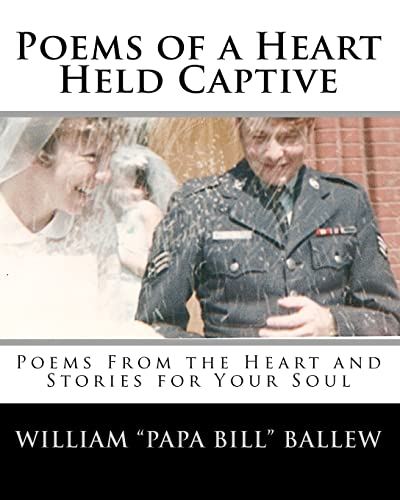 "Poems From the Heart and Stories for Your Soul" by William "Papa Bill" Ballew and a few of his friends. A collection of poetry and short stories by "Papa Bill" Ballew, including some poetry from the "Papa Bill's Street Life" Poem Collection. "Papa Bill" writes historical-fiction which is a very popular today, especially among young adults. Poems and stories are contributed by Julie Heuer, Renee Karcich, John McCracken, McKenna Hickox, Alexis Sherry Ballew, Hunter Heuer, Sierra Heuer, Sheryl Laub, Richard Guerra and Orlando Walker. Bill Ballew has never truely let go of his wife, Sherry and thus this book reveals the depth of his love for her, even after 23 years, after her passing. There is a large cross section of poems and styles and you will most certainly find one or more poets that you enjoy. The book also will help new writers by sharing information on protecting your copyright and the self-publishing process; in today's POD (publish on demand) environment, new writers can see their dreams come true quicker than at any time in the past century! Createspace is the best tool for any writer in today's tough writing world!

William "Papa Bill" Ballew was born and raised in Iowa. Baby Billy was baptized by Father Flanagan, founder of Boys Town. Bill joined the USAF in 1965, right after graduating from Bishop Heelan Catholic High School and served in the US Air Force in many locations, including the Philippines’, Taiwan and Japan in the Far East during the Vietnam War. His hobbies include writing, weekly $20 NLH poker game with friends, golf, racquetball, archery, weightlifting (smaller weights lately as I near eligibility for Social Security), playing Pinochle, smoking an occasional cigar with his many friends plus Papa Bill plays poker at the World Series of Poker and he cashed at the WSOP in 2006, finishing 62nd out of 1,184 players. In the 2007 World Series of Poker Main Event, "Papa Bill" went deep but finished just short of the money. "Papa Bill" has five published books to his credit including: 1) The Unbeatable Pinochle System 2) Cigar-versations - The Godfather Chronicles 3) Poem's of a Heart Held Captive and 4) Papa Bill's 1001 Party Favorites Joke Book and The Joke Vault. Mr. Ballew currently lives in California to be near his children, Julie and Nathan plus his three grand children: Alexis, Hunter and Sierra.

1. Poems of a Heart Held Captive: Poems From the Heart and Stories for Your Soul

2. Poems of a Heart Held Captive