Items related to The Bodies Left Behind

Deaver, Jeffery The Bodies Left Behind

The Bodies Left Behind 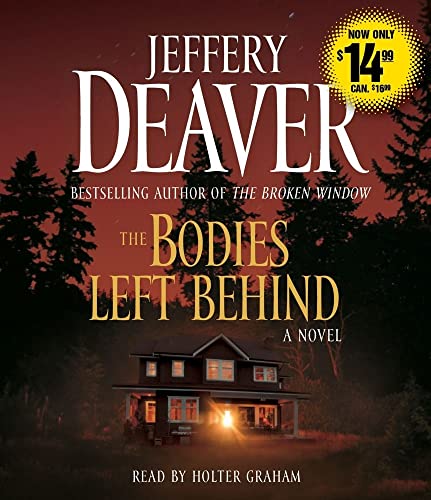 Jeffery Deaver’s New York Times bestseller, The Bodies Left Behind , is now available from Encore and will coincide with the hardcover and audio of Deaver’s latest thriller, Edge .

A call to the police from a vacation house on the isolated Lake Mondac is cut short. Was it a phone glitch or something worse? Off-duty police deputy Brynn McKenzie leaves her family at the dinner table to investigate—and walks right into a nightmare when she stumbles upon the scene of an atrocious, gruesome murder. Brynn realizes that the perpetrator hasn’t left the crime scene yet, but it’s already too late to call for backup—dense woods surround the house, and there is nowhere for her to run but into the hostile Wisconsin wilderness. Will Brynn be his next victim?

Deaver’s trademark plot twists and ticking bomb suspense tactics leaves listeners wanting more, and the real-time chronology of The Bodies Left Behind makes it an intense, fast-paced, and visceral experience that will shock listeners until the very last moment.

Amazon Best of the Month, November 2008: Nothing is as it seems in The Bodies Left Behind, Jeffrey Deaver's quintessential can't-put-it-down thriller about an off-duty cop who investigates an aborted 911 call from a secluded vacation home and ends up on the run. From the opening scene (that'll keep even the bravest of you at home with the doors locked and the shades drawn), Deaver delivers a clever page-turner that reads like one of his tightly plotted and fast-paced short stories (fans should check out Twisted). Endlessly surprising (there is more than one jaw-dropping plot twist) and supremely gripping (two hours after cracking this stand-alone thriller, I came up for air and took a moment to shake the cramp out of my fingers), The Bodies Left Behind is one of the most entertaining thrillers of the year. --Daphne Durham

Jeffery Deaver is the #1 international bestselling author of more than forty novels, three collections of short stories, and a nonfiction law book. His books are sold in 150 countries and translated into 25 languages. His first novel featuring Lincoln Rhyme, The Bone Collector, was made into a major motion picture starring Denzel Washington and Angelina Jolie, which is currently being adapted for television by NBC.

He's received or been shortlisted for a number of awards around the world, including Novel of the Year by the International Thriller Writers and the Steel Dagger from the Crime Writers' Association in the United Kingdom. In 2014, he was the recipient of three lifetime achievement awards. A former journalist, folksinger, and attorney, he was born outside of Chicago and has a bachelor of journalism degree from the University of Missouri and a law degree from Fordham University.

1. The Bodies Left Behind: A Novel