Friends and Foes Volume II: Friendship and Conflict from Social and Political Perspectives 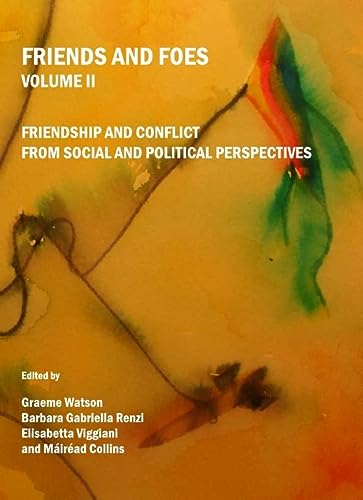 The product of an international, multi-disciplinary conference at Queen's University Belfast, the two-volume 'Friends and Foes' series offers an illuminating investigation of the relationship between friendship and conflict by established and emerging scholars. This second volume explores the topic from political, sociological and psychological perspectives. Many of these essays examine what types of friendships are forged, and how, in contexts of potential, or actual, social and political conflict, such as in Northern Ireland during the Troubles. Others focus on how situations of conflict can be transformed into friendship, using insights from psychology, philosophy, history and anthropology. The papers in this volume will appeal to sociologists, political scientists, and all those concerned with themes of conflict resolution, identity, social capital, community-building and well-being.

Mairead Collins is a PhD student at QUB's School of Politics, International Studies and Philosophy. Her main academic interests are transitional justice theories, moral philosophy and theories of narrative and identity. Elisabetta Viggiani graduated in English Language and Literature at 'La Sapienza' university in Rome. After completing a Master's degree in Irish Studies on public forms of memorialisation to the victims of the 'Troubles' in Belfast, she is currently undertaking a PhD on the politics of commemoration in Northern Ireland at Queen's University Belfast. Graeme Watson is a writer, researcher, comedian and library assistant based at Queen's University Belfast. His current research involves investigating the possibilities and limitations of the new 'politics of well-being' and articulating a 'radical humanist' political philosophy, drawn from the work of Erich Fromm, Lewis Mumford and Ivan Illich. Barbara Gabriella Renzi completed her PhD in Philosophy of Science at Queen's University Belfast. She studied Philosophy of Science and specialised in Bioethics at the University 'La Sapienza' in Rome. She published various papers in peer-reviewed journals and co-edited two collections of philosophical papers, published by Cambridge Scholars Press. Her poems appear in Italian anthologies and she is currently working on the translation of short stories from the Troubles.