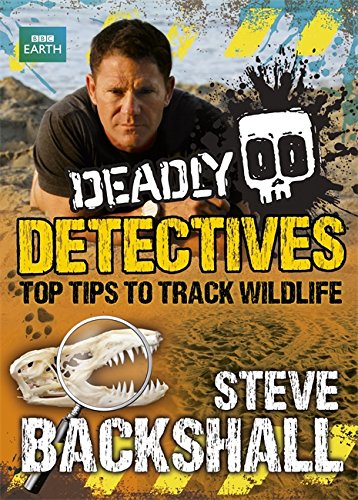 Finding wildlife is rarely easy - unless you're Steve Backshall! In DEADLY DETECTIVES Steve tells young trackers everything they need to know about the origins of tracking, what you need to become a tracker and how to do it, whether the wild world is your own back garden, ancient woodlands, the riverside or coast. He illustrates his tips with examples of his own detective work on land and in the water from tropical rainforests to the African Savannah, from the Arctic tundra to the desert. Join him as footsteps, feeding habits and even a pile of pooh reveal snow leopards, crocodiles, gators, snakes and polar bears, while closer to home you can track foxes, squirrels, badgers and birds, using exactly the same techniques.

Steve Backshall is the hugely popular and fearless presenter of the Children's BBC series Deadly 60, Live and Deadly, Deadly 360 and Deadly Art. Steve travels the world to learn about the most inspiring predators, from boxing mantis shrimp to charging tigers. Steve also regularly writes articles for newspapers and magazines including the NATIONAL GEOGRAPHIC TRAVELER and BBC WILDLIFE and is an inspirational public speaker. Visit Steve's website at www.stevebackshall.com and follow him on Twitter at https://twitter.com/SteveJBackshall.

Backshall shows kids how to follow in his footsteps and track wildlife closer to home in a lavish new gift book. THE BOOKSELLER Everything from how to find animals to basic survival techniques in a fun and highly educational book sure to tempt even the most reluctant reader. THE BOOKBAG