Items related to Dark Times In The City

Dark Times In The City

Dark Times In The City 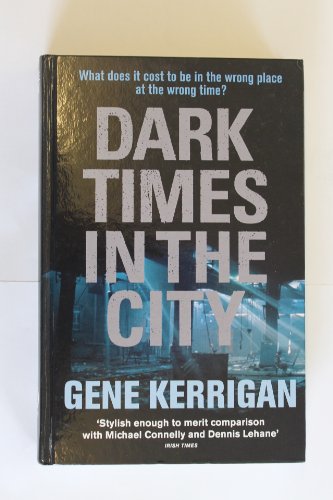 Danny Callaghan is having a quiet drink in a Dublin pub when two men with guns walk in. They're here to take care of a minor problem - petty criminal Walter Bennett. On impulse, Callaghan intervenes to save Walter's life. Soon, his own survival is in question. With a troubled past and an uncertain future, Danny finds himself drawn into a vicious scheme of revenge. Dark Times in the City depicts an edgy city where affluence and cocaine fuel a ruthless gang culture, and a man’s fleeting impulse may cost the lives of those who matter most to him. Kerrigan’s new novel is his finest yet; a CWA Gold Dagger Crime Novel finalist, its gripping from start to finish, powerful, original and impossible to put down.

Gene Kerrigan is an award-winning journalist and the author of the novels The Midnight Choir, Little Criminals, and The Rage, which was awarded the CWA’s 2012 Gold Dagger Prize for Best Crime Novel Of the Year. He lives in Dublin.

*Starred Review* Following The Rage (one of Booklist’s top 10 crime novels of 2013), Kerrigan delivers another spare, cut-to-the-bone noir in which a well-meaning ex-con finds himself trapped in the vice of circumstance. Danny Callaghan is having a beer in a Dublin pub when two armed men barge in, seemingly intent on killing another of the pub’s patrons. Danny instinctively intervenes, saving the intended victim’s life but winding up in the middle of a gang war between two of the city’s drug lords, one of whom has unfinished business with Danny. In the aftermath of the incident, Danny realizes that no one—neither the drug lords nor the cop investigating the case—believes that his involvement was purely coincidental. So begins the doomed attempt of a good man to get out of harm’s way. Danny, unfortunately, has an Achilles’ heel: he can’t just walk away; he’s compelled to set things right, to even the scales. But the scales in recession-ravaged Dublin are set permanently askew. It’s a classic noir setup—complete with the disaffected wife and child with whom Danny longs to reconnect, though his every move makes reconciliation even more impossible—but Kerrigan manages to inject new vigor in the formula, not with any surprise plotting (there are no surprises in noir) but with the crispness and submerged power of his understated prose. Kerrigan’s grasp of contemporary Dublin and its underworld denizens puts him shoulder to shoulder with the best Irish crime writers (Ken Bruen, Benjamin Black, Declan Hughes), but his mix of noir and poetry also suggests another emerging superstar from a different continent, Urban Waite (The Carrion Birds, 2013). --Bill Ott

1. Dark Times In The City

2. Dark Times In The City

Book Description Charnwood. Condition: Good. A+ Customer service! Satisfaction Guaranteed! Book is in Used-Good condition. Pages and cover are clean and intact. Used items may not include supplementary materials such as CDs or access codes. May show signs of minor shelf wear and contain limited notes and highlighting. Seller Inventory # 1444801570-2-4

3. Dark Times In The City