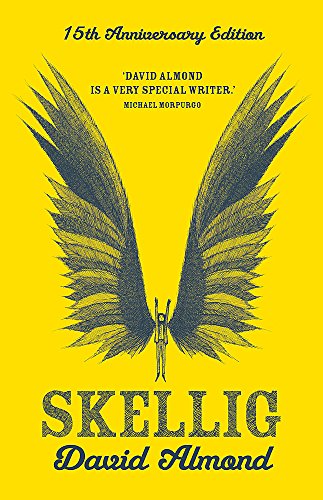 To celebrate 15 year of this internationally successful, multi-award-winning novel, a beautiful clothbound edition, with newly commissioned artwork, and special features: - essays by David Almond on the conception and writing of Skellig - exclusive first UK publication of the short story that links Skellig with Mina - the poetry of Skellig - two complete William Blake poems - Skellig: a life - how the novel has transcended the page to become an opera and a film. When a move to a new house coincides with his baby sister's illness, Michael's world seems suddenly lonely and uncertain. Then he stumbles into the old, ramshackle garage, and finds something magical. A strange creature - part owl, part angel, a being who needs Michael's help if he is to survive. With his new friend Mina, Michael nourishes Skellig back to health, while his baby sister languishes in the hospital. But Skellig is far more than he at first appears, and as he helps Michael breathe life into his tiny sister, Michael's world changes for ever ...

"I thought he was dead. He was sitting with his legs stretched out and his head tipped back against the wall. He was covered with dust and webs like everything else and his face was thin and pale. Dead bluebottles were scattered on his hair and shoulders. I shined the flashlight on his white face and his black suit."

This is Michael's introduction to Skellig, the man-owl-angel who lies motionless behind the tea chests in the abandoned garage in back of the boy's dilapidated new house. As disturbing as this discovery is, it is the least of Michael's worries. The new house is a mess, his parents are distracted, and his brand-new baby sister is seriously ill. Still, he can't get this mysterious creature out of his mind--even as he wonders if he has really seen him at all. What unfolds is a powerful, cosmic, dreamlike tale reminiscent of Madeleine L'Engle's A Wrinkle in Time. British novelist David Almond works magic as he examines the large issues of death, life, friendship, love, and the breathtaking connections between all things.

Amidst the intensity and anxiety of his world, Michael is a normal kid. He goes to school, plays soccer, and has friends with nicknames like Leakey and Coot. It's at home where his life becomes extraordinary, with the help of Skellig and Mina, the quirky, strong-willed girl next door with "the kind of eyes you think can see right through you." Mina and her mother's motto is William Blake's "How can a bird that is born for joy / Sit in a cage and sing?" This question carries us through the book, as we see Michael's baby sister trapped in a hospital incubator; as we see the exquisite, winged Skellig crumpled in the garage; as we meet Mina's precious blackbird chicks and the tawny owls in her secret attic; and as we finally see a braver, bolder Michael spread his wings and fly. Skellig was the Whitbread Award's 1998 Children's Book of the Year, and this haunting novel is sure to resonate with readers young and old. (Ages 10 and older) --Karin Snelson

Man, bird, or angel? Who or what is Skellig?

Michael was looking forward to moving into a new house. It was all going to be wonderful. But now his baby sister's ill, his parents are frantic, and Dr. Death has come to call. Michael feels helpless. Then one day he steps into the crumbling garage.

What is this thing beneath the spiderwebs and dead flies? A human being, or a strange kind of beast never seen before? The only person Michael can confide in is his new friend Mina. Together they carry the creature out into the light, and Michael's world changes forever.

Told in lyrical prose, and beautifully read by the author David Almond, Skellig is a mystery, an adventure, and a family story, in which Michael learns about nature, poetry, and the healing power of love.