Items related to The Illustrated Guide to Armageddon: Britain's... 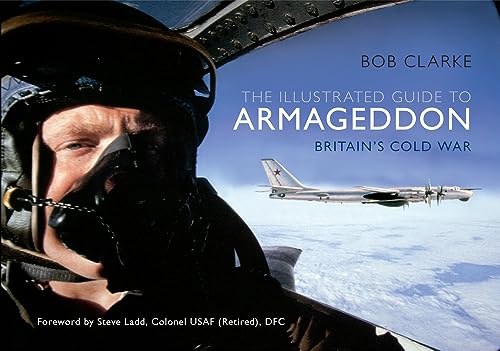 From the late 1940s to the fall of Communist Russia, Britain was at war. To the general public much of it was imaginary but the Cold War was real nonetheless. Flaring up in 1962, with the Cuban missile crisis and in the 1980s with the standoffs between Reagan and Thatcher on one side, with the Soviet leaders on the other. There are many remains today from 'secret' nuclear bunkers to missile sites, early-warning radar sites, huge research establishments and, of course, spy sites such as GCHQ. Bob Clarke tells the story of the myriad Cold War remains, illustrated with 150 images, most never published before. He explains the need for our defences and the consequences of nuclear war.

Brian Clarke qualified as a Merchant Naval Radio Officer but elected to go into Intelligence work. After serving in Air Intelligence, Military Intelligence he worked for GCHQ for twenty three and a half years until he was medically retired, when he took up writing.

Book Description Amberley Publishing, Stroud, 2012. Paperback. Condition: New. First Edition. A resume of the lead up to the Cold War is followed by a guided tour of the missile sites, radar installations, civilian bunker networks and numerous other sites and hardware that formed Britain's front line of the Cold War. 128 pages. Illustrated throughout with colour and b/w photographs. Every book is sent in a cardboard postal package. Size: 17 Cm x 25 Cm. Seller Inventory # 9621