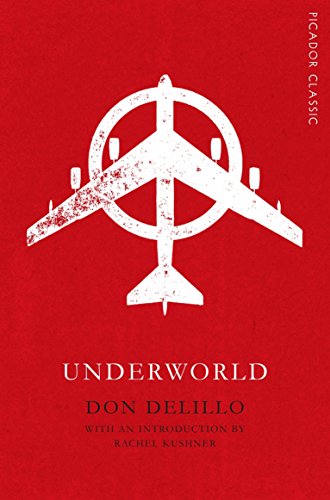 Review:
While Eisenstein documented the forces of totalitarianism and Stalinism upon the faces of the Russian peoples, DeLillo offers a stunning, at times overwhelming, document of the twin forces of the cold war and American culture, compelling that "swerve from evenness" in which he finds events and people both wondrous and horrifying. Underworld opens with a breathlessly graceful prologue set during the final game of the Giants-Dodgers pennant race in 1951. Written in what DeLillo calls "super-omniscience" the sentences sweep from young Cotter Martin as he jumps the gate to the press box, soars over the radio waves, runs out to the diamond, slides in on a fast ball, pops into the stands where J. Edgar Hoover is sitting with a drunken Jackie Gleason and a splenetic Frank Sinatra, and learns of the Soviet Union's second detonation of a nuclear bomb. It's an absolutely thrilling literary moment. When Bobby Thomson hits Branca's pitch into the outstretched hand of Cotter--the "shot heard around the world"--and Jackie Gleason pukes on Sinatra's shoes, the events of the next few decades are set in motion, all threaded together by the baseball as it passes from hand to hand.

"It's all falling indelibly into the past," writes DeLillo, a past that he carefully recalls and reconstructs with acute grace. Jump from Giants Stadium to the Nevada desert in 1992, where Nick Shay, who now owns the baseball, reunites with the artist Kara Sax. They had been brief and unlikely lovers 40 years before, and it is largely through the events, spinoffs, and coincidental encounters of their pasts that DeLillo filters the Cold War experience. He believes that "global events may alter how we live in the smallest ways," and as the book steps back in time to 1951, over the following 800-odd pages, we see just how those events alter lives. This reverse narrative allows the author to strip away the detritus of history and pop culture until we get to the story's pure elements: the bomb, the baseball, and the Bronx. In an epilogue as breathless and stunning as the prologue, DeLillo fast-forwards to a near future in which ruthless capitalism, the Internet, and a new, hushed faith have replaced the Cold War's blend of dread and euphoria.

Through fragments and interlaced stories--including those of highway killers, artists, celebrities, conspiracists, gangsters, nuns, and sundry others--DeLillo creates a fragile web of connected experience, a communal Zeitgeist that encompasses the messy whole of five decades of American life, wonderfully distilled.

About the Author:
Don DeLillo is the acclaimed author of fifteen novels and three plays. He has won the National Book Award, the Jerusalem Prize and the Irish Times International Fiction Prize.

Buy Used
Condition: Very Good
With an introduction by author... Learn more about this copy

Book Description Paperback. Condition: Very Good. With an introduction by author Rachel Kushner. He speaks in your voice, American, and there's a shine in his eye that's halfway hopeful. It's a vast and sprawling crowd that comes together to watch the Dodgers-Giants 1951 National League Final, and when Bobby Thomson hits the Shot Heard Round the World and wins the pennant race for the Giants, ripples are formed in the heavy undercurrent of time. Meanwhile, on the other side of the planet, another historic shot is fired: the USSR's second atomic detonation. And so Underworld follows the threads that link a symphonic cast of characters: men and women, together and apart, whose search for meaning, survival and connection will spill out over decades. Underworld is Don DeLillo's masterpiece, a novel of intense ambition and soaring architecture, and a panoramic vision of America set against the overarching conflict of the Cold War. It is awe-inspiring storytelling and an undisputed modern classic. The book has been read, but is in excellent condition. Pages are intact and not marred by notes or highlighting. The spine remains undamaged. Seller Inventory # GOR007313250

Shipping: US$ 8.69
From United Kingdom to U.S.A.
Destination, rates & speeds

Book Description Paperback. Condition: Used; Good. **Simply Brit** Shipped with Premium postal service within 24 hours from the UK with impressive delivery time. We have dispatched from our book depository; items of good condition to over ten million satisfied customers worldwide. We are committed to providing you with reliable and efficient service at all times. Seller Inventory # 1777790

Book Description Paperback. Condition: Used; Good. **SHIPPED FROM UK** We believe you will be completely satisfied with our quick and reliable service. All orders are dispatched as swiftly as possible! Buy with confidence! Greener Books. Seller Inventory # 2173704

Book Description Condition: Good. A+ Customer service! Satisfaction Guaranteed! Book is in Used-Good condition. Pages and cover are clean and intact. Used items may not include supplementary materials such as CDs or access codes. May show signs of minor shelf wear and contain limited notes and highlighting. Seller Inventory # 1447289390-2-4

Book Description Paperback. Condition: Very Good. ALL ITEMS ARE DISPATCHED FROM THE UK WITHIN 24 HOURS ( BOOKS ORDERED OVER THE WEEKEND DISPATCHED ON MONDAY) ALL OVERSEAS ORDERS SENT BY AIR MAIL. WE ALSO ACCEPT PAYMENT IN US DOLLARS OR EURO BY BANK TRANSFER. IF YOU ARE LOCATED OUTSIDE THE UK PLEASE ASK US FOR A POSTAGE QUOTE FOR MULTI VOLUME SETS BEFORE ORDERING. Seller Inventory # mon0000759225

Shipping: US$ 17.38
From United Kingdom to U.S.A.
Destination, rates & speeds