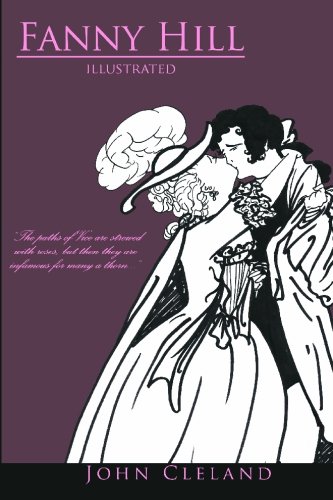 John Cleland is said to have "misapplied considerable talents" in writing his scandalous 1749 novel, Memoirs of a Woman of Pleasure, or; Fanny Hill. Nevertheless, the book has near-constantly remained in print, even where declared criminal, till finally being recognized as a classic of 18th century literature. It's known to have sold for as much as $40 for a new printing in 1863 -- several hundred dollars in today's money. Fanny Hill, age 15, is orphaned by a smallpox outbreak and forced to fend for herself. She narrowly escapes selling her virginity in a brothel after being tricked into taking a job there, and soon loses her beloved to the machinations of his wicked father. What, then, is left for Fanny to do? The text of this edition is copied from a famous French printing, and illustrated with several charming black-and-white illustrations.

Newly printed with fun-filled illustrations modeled on the classic "Tijuana Bible" style of erotica, this enjoyable edition of the Fanny Hill book is a must have for literary fans and art collectors alike.

John Cleland (1709? - 1789) was an English novelist most famous and infamous as the author of Fanny Hill; or, the Memoirs of a Woman of Pleasure. He was the oldest son of William Cleland (1673/4 - 1741) and Lucy Cleland. He was born in Kingston upon Thames in Surrey but grew up in London, where his father was first an officer in the British Army and then a civil servant. William Cleland was a friend to Alexander Pope, and Lucy Cleland was a friend or acquaintance of both Pope, Viscount Bolingbroke, Chesterfield, and Horace Walpole. The family possessed good finances and moved among the finest literary and artistic circles of London.

Book Description CreateSpace Independent Publishing Platform 2009-06-22, 2009. Paperback. Condition: Good. Item is in good condition. Some moderate creases and wear. This item may not come with CDs or additional parts including access codes for textbooks. Might be an ex-library copy and contain writing/highlighting. Seller Inventory # DS-1448607272-3