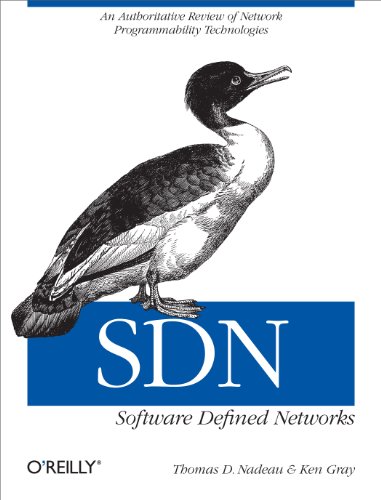 Explore the emerging definitions, protocols, and standards for SDN—software-defined, software-driven, programmable networks—with this comprehensive guide. Two senior network engineers show you what’s required for building networks that use software for bi-directional communication between applications and the underlying network infrastructure.

This vendor-agnostic book also presents several SDN use cases, including bandwidth scheduling and manipulation, input traffic and triggered actions, as well as some interesting use cases around big data, data center overlays, and network-function virtualization. Discover how enterprises and service providers alike are pursuing SDN as it continues to evolve.

Thomas D. Nadeau is a Distinguished Engineer in the PSD CTO Office at Juniper Networks where he is responsible for leading all aspects of Software Defined Networks and Network Programmability. Thomas received his BSCS from The University of New Hampshire, and a M.Sc. from The University of Massachusetts in Lowell, where he has been an Adjunct Professor of Computer Science since 2000 and teaches courses on the topic of data communications. He is also on the technical committee of several prominent networking conferences where he provides technical guidance on their content, as well as frequently presents.

Ken Gray is responsible for technical strategy and innovation for Juniper Network's Platform Systems Division, with a particular focus on core routing and the evolving area of Software Defined (Driven) Networks. Prior to his current role, Ken worked at Cisco Systems from 1995-2011 in a variety of roles, ultimately as a Principal Engineer working on the development and deployment of high-end routing platforms and operating systems. From 1984 to 1995, Ken was a network geek responsible for designing large public and private networks at a company that ultimately became Verizon. Ken has his MSEE (Telecommunications) from the University of Maryland.