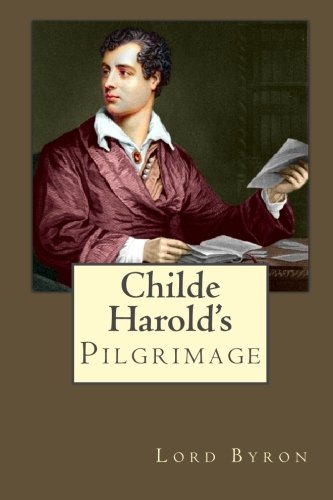 "Childe Harold's Pilgrimage" is Lord Byron at his best-strumming all the right lyrical cords of the hearts of men and women. Byron was a man of his time--faults and all--but who used the literary art to rise above the common lot of aristocrats. Some beautiful excerpts would include "There is a pleasure in the pathless woods/There is a rapture on the lonely shore" or "To such as see thee not my words were weak; To those who gaze on thee, what language could they speak?" There is no better way to feel Byron's craft and the development of his soul and style than by reading "Child Harold's Pilgrimage," a lengthy narrative poem first published in the early 1800's and dedicated to "Ianthe", the term of endearment he used for Charlotte Harley (the artist Francis Bacon's great-great-grandmother). "Child Harold's Pilgrimage" describes the travels and reflections of a world-weary young man who, disillusioned with a life of pleasure and revelry, looks for distraction in foreign lands; in a wider sense, it is an expression of the melancholy and disillusionment felt by a generation weary of the wars of the post-Revolutionary and Napoleonic eras. The title comes from the term childe, a medieval title for a young man who was a candidate for knighthood.

George Gordon Byron, later Noel, 6th Baron Byron,of Rochdale, FRS, and commonly known today as Lord Byron ( 1788-1824) was an English poet and a leading figure in Romanticism. Amongst Byron's best-known works are the brief poems She Walks in Beauty, When We Two Parted, and So, we'll go no more a roving, in addition to the narrative poems Childe Harold's Pilgrimage and Don Juan. He is regarded as one of the greatest British poets and remains widely read and influential, both in the English-speaking world and beyond.