Items related to Cuba On My Mind

Jim Hunt And Bob Risch Cuba On My Mind

Cuba On My Mind 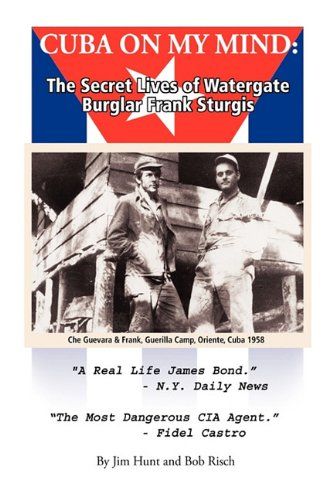 "Burgling Watergate may have been Frank’s easiest assignment. Using over 30 aliases he trained guerillas in 12 countries on 3 continents, took part in assassination plots and the overthrow of 7 governments. He was a spy and counterspy for the CIA. He fought with Che Guevera and Fidel and against them. He was Castro’s casino czar, he knew mob bosses. He helped plan and took part in the Bay of Pigs invasion. He plotted to ransom the USS Pueblo and trade places with the Iran hostages. At 17, he was a decorated member of the famed 1st marine Edson’s Raiders and at 37 a suspect in JFK’s assassination. It’s an extraordinary story.

This biography explores such issues as -- how and why did Cuba become a communist country? Was Fidel a communist all along? Is Che Guevara’s reputation as a guerilla war expert overblown? What mistake did Che make that let the CIA track him down and assassinate him in Bolivia? Why were the Watergate burglars innocent though caught red-handed? Was Watergate something much more sinister than mere political espionage? How and why the Bay of Pigs invasion ended in disaster. Who and what were responsible for the assassination of President Kennedy?"