Items related to Experiences with Mahamudra: The Lama of Appearances:...

Erlewine, Michael Experiences with Mahamudra: The Lama of Appearances: Learning Dharma Through Nature

Experiences with Mahamudra: The Lama of Appearances: Learning Dharma Through Nature 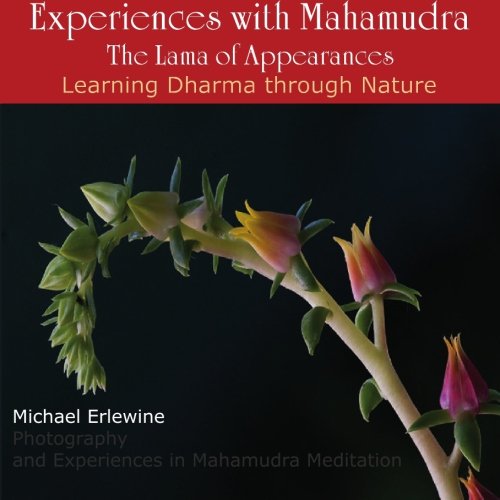 "The Lama of Appearances" provides an introduction to an important Tibetan teaching that is little known here in the West, and that is that nature herself, the world of appearances, is a perfect reflection of the mind, and can be a trusted guide to learning and practicing dharma, in particular where there is no dharma teacher available. This full-color book contains 130 hi-res close-up photos of nature along with three dharma-related articles. The first, mentioned above, is an introduction to using the natural world for training in the dharma. The second article is the personal history of how the author went through preliminary and advanced practices in Tibetan Buddhism and achieved some preliminary recognition of the true nature of the mind. This is a personal story of learning meditation and other Tibetan practices, with all of their joys and trials. In particular, this story is about the author's adventures learning Mahamudra meditation, and how to practice it. And last, "The Seven Points of Mind Training," one of the key texts in Tibetan Buddhism, is presented, with all fifty-nine of its slogans, accompanied by full-page color photographs.

Michael Erlewine has studied and practiced Tibetan Buddhism for some 35 years and has traveled in Tibet, Nepal, India, and China. Erlewine has worked for the last 27 years with the same teacher, a Tibetan lama and Rinpoche, under whose direction he and his wife Margaret have run a meditation center for the last 25 years in Big Rapids, Michigan. Erlewine has supervised and produced scores of translations and transcriptions of Tibetan teachings and practice texts. Michael Erlewine is a skilled photographer and videographer, in particular in macro and close-up photography. Erlewine is an award-winning archivist of popular culture and renowned astrologer. Perhaps best known for founding AMG, the All-Music Guide, All-Movie Guide, All-Game Guide, Classic Rock Posters Guide, and other large Internet sites, Erlewine is also an expert photographer, author (some 35 books), lecturer, and counselor. Erlewine founded Matrix Software in 1977, the second oldest software company on the web, the only older being Microsoft. Erlewine is also a musician. He traveled with Bob Dylan in 1961, was lead singer and amplified harmonica player for the Prime Movers Blues Band (Iggy Pop was his drummer), and opened for Cream in 1967 during the Summer of Love at the Fillmore Auditorium in San Francisco.

1. Experiences with Mahamudra: The Lama of Appearances: Learning Dharma Through Nature