Items related to The Great Quest a Romance of 1826, Wherein Are Recorded...

Hawes, Charles Boardman The Great Quest a Romance of 1826, Wherein Are Recorded the Experiences of Josiah Woods (Classic Reprint)

The Great Quest a Romance of 1826, Wherein Are Recorded the Experiences of Josiah Woods (Classic Reprint) 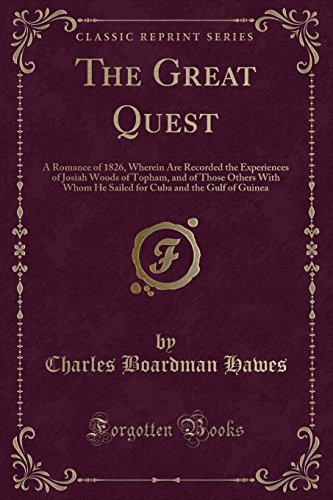 Rain had fallen in the night, and the air was still fresh and cool. Although the clock had but just struck six, I had been at work an hour, and now that my uncle, Seth Upham, had come down to take charge of the store, I was glad that some business discussed the evening before gave me an excuse to go on an errand to the other end of the village. Uncle Seth looked up from his ledger as I passed. You are prompt to go, said he. Ive scarce got my hat on the peg. Well, the sooner the better, I suppose. Young Mackay slast shipment of oil was of poor quality and color. The rascal needs a good wigging, but the best you can do is tell the old man my opinion of his sons goods. If he gets a notion that we re likely to go down to nine cents a gallon on the next lot, he 11 bring the boy to taw, Ill warrant you. Well, be gone. The sooner you go, the sooner youll come, and we re like to have a busy day. I nodded and went down the steps, but turned again and looked back.
(Typographical errors above are due to OCR software and don't occur in the book.)

Forgotten Books' Classic Reprint Series utilizes the latest technology to regenerate facsimiles of historically important writings. Careful attention has been made to accurately preserve the original format of each page whilst digitally enhancing the aged text. Read books online for free at www.forgottenbooks.org

1. The Great Quest: A Romance of 1826, Wherein are Recorded the Experiences of Josiah Woods of Topham, and of Those Others With Whom He Sailed for Cuba and the Gulf of Guinea (Classic Reprint)