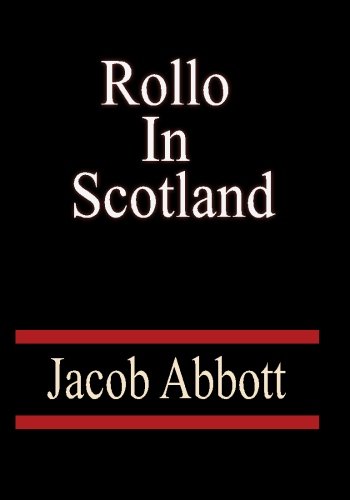 A passage from the book... On the way from Liverpool to Glasgow, Rollo became acquainted with a boy named Waldron Kennedy. Waldron was travelling with his father and mother and two sisters. His sisters were mild and gentle girls, and always kept near their mother; but Waldron seemed to be always getting into difficulty, or mischief. He was just about Rollo's age, but was a little taller. He was a very strong boy, and full of life and spirits. He was very venturesome, too, and he was continually frightening his mother by getting himself into what seemed to her dangerous situations. One morning, when she came up on deck, just after the steamer entered the mouth of the Clyde, she almost fainted away at seeing Waldron half way up the shrouds. He was poising himself there on one of the ratlines, resting upon one foot, and holding on with only one hand.

Jacob Abbott (November 14, 1803 – October 31, 1879) was an American writer of children's books. He was a prolific author, writing juvenile fiction, brief histories, biographies, religious books for the general reader, and a few works in popular science. He wrote 180 books and was a coauthor or editor of 31 more. He died in Farmington, Maine, where he had spent part of his time after 1839, and where his brother, Samuel Phillips Abbott, founded the Abbott School.