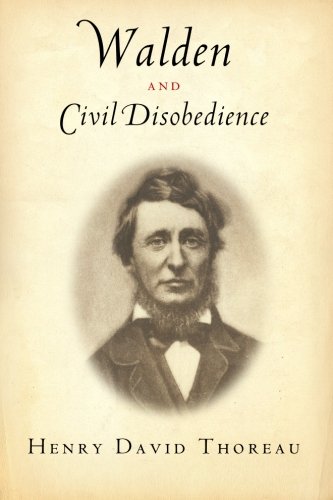 This volume contains Henry David Thoreau's most popular and enduring works, "Walden" and "On the Duty of Civil Disobedience."
For Henry David Thoreau, there was no separation between public politics and personal principle. "On the Duty of Civil Disobedience" is his famous account of the night he spent in jail for refusing to pay taxes to a government that supported slavery and waged war. His impassioned stand for justice later inspired Gandhi, Martin Luther King, and many other peaceful revolutionaries.

The Kindle e-book is FREE when you buy the paperback. (Applies to American Renaissance Books edition only.)

Henry David Thoreau (1817–1862) (properly pronounced Thaw-roe) was an American author, poet, abolitionist, naturalist, tax resister, development critic, surveyor, historian, philosopher, and leading transcendentalist. He is best known for his book Walden, a reflection upon simple living in natural surroundings, and his essay, Civil Disobedience, an argument for individual resistance to civil government in moral opposition to an unjust state. Thoreau's books, articles, essays, journals, and poetry total over 20 volumes. Among his lasting contributions were his writings on natural history and philosophy, where he anticipated the methods and findings of ecology and environmental history, two sources of modern day environmentalism. His literary style interweaves close natural observation, personal experience, pointed rhetoric, symbolic meanings, and historical lore; while displaying a poetic sensibility, philosophical austerity, and "Yankee" love of practical detail. He was also deeply interested in the idea of survival in the face of hostile elements, historical change, and natural decay; at the same time he advocated abandoning waste and illusion in order to discover life's true essential needs. He was a lifelong abolitionist, delivering lectures that attacked the Fugitive Slave Law while praising the writings of Wendell Phillips and defending abolitionist John Brown. Thoreau's philosophy of civil disobedience influenced the political thoughts and actions of such later figures as Leo Tolstoy, Mahatma Gandhi, and Martin Luther King, Jr. Thoreau is sometimes cited as an individualist anarchist. Though Civil Disobedience seems to call for improving rather than abolishing government – "I ask for, not at once no government, but at once a better government" – the direction of this improvement points toward anarchism: "'That government is best which governs not at all;' and when men are prepared for it, that will be the kind of government which they will have." Richard Drinnon partly blames Thoreau for the ambiguity, noting that Thoreau's "sly satire, his liking for wide margins for his writing, and his fondness for paradox provided ammunition for widely divergent interpretations of 'Civil Disobedience.'" He further points out that although Thoreau writes that he only wants "at once" a better government, that does not rule out the possibility that a little later he might favor no government.

Henry David Thoreau was born in Concord, Massachusetts in 1817. He graduated from Harvard in 1837, the same year he began his lifelong Journal. Inspired by Ralph Waldo Emerson, Thoreau became a key member of the Transcendentalist movement that included Margaret Fuller and Bronson Alcott. The Transcendentalists' faith in nature was tested by Thoreau between 1845 and 1847 when he lived for twenty-six months in a homemade hut at Walden Pond. While living at Walden, Thoreau worked on the two books published during his lifetime: Walden (1854) and A Week on the Concord and Merrimack Rivers (1849). Several of his other works, including The Maine Woods, Cape Cod, and Excursions, were published posthumously. Thoreau died in Concord, at the age of forty-four, in 1862.
W.S. Merwin has published many highly regarded books of poems, for which he has received a number of distinguished awards—the Pulitzer Prize, Bollingen Award, Fellowship of the Academy of American Poets and the Governor's Award for Literature of the state of Hawaii among them. He has translated widely from many languages, and his versions of classics such as The Poem of the Cid and The Song of Roland are standards.