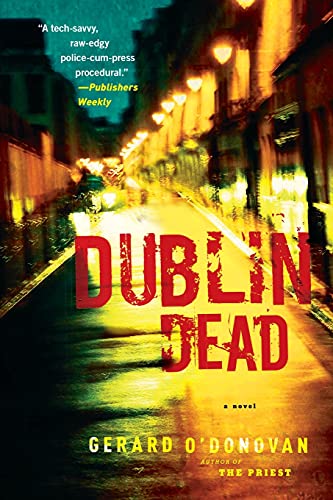 DI Mike Mulcahy is exactly where he wants to be, coordinating international intelligence for Ireland’s National Drugs Unit. But with the economy in meltdown and his department facing tough cutbacks, his dream job is in jeopardy. Then Mulcahy spots a possible link between the murder of a Dublin gangster in Spain and a massive shipment of cocaine abandoned off the south coast of Ireland. Could this be the break he’s been praying for?

Meanwhile, reporter Siobhan Fallon is still recovering from her ordeal at the hands of a sadistic killer. Work is her only refuge, and while she’s an emotional basket case, her nose for a story is as sharp as ever. When a suicide turns out to have a bizarre missing-persons angle, she’s convinced there is something darker to it. But with a vital piece of evidence beyond her grasp, she has to turn to Mulcahy for help.

Mulcahy and Fallon have no idea what deadly ground they’re setting out on together, or that their journey will lead them on a twisted trail of terror to the rocky shores and windswept hills of West Cork and a blood-drenched showdown with a remorseless killer.

Gerard O’Donovan was born in Cork and grew up in Dublin. After a brief career in the Irish civil service he travelled widely, working as a barman, bookseller, gherkin-bottler, philosophy tutor, and English teacher before settling down to make a living as a journalist and critic for, among others, The Sunday Times and The Daily Telegraph. In 2007 he was shortlisted for the Crime Writers' Association’s prestigious Debut Dagger competition.

THE DOOR. ALL HE HAD TO DO WAS GET TO IT. THE BREATH BURNED IN HIS lungs as he ran. Each rasping heave of his chest was all he could hear above the thud of his feet on the sun-dried grass, the scuff of his trainers kicking up the powdery earth beneath, and the baleful thumping tread of the man pursuing him through the dark, fifty, maybe only forty, metres behind, gaining with every stride. No way would he risk glancing back. He already knew what death looked like.

Ahead, the boxy white walls of a low-slung house stood out against the dark slopes and shadowed gullies of the hillside behind and the moon-bright sky above. The door. That was all that mattered. La puerta. He had to focus on it. De duer. The door to his own house. Stout, defensible. In his head he brought it forward, saw every detail, every swirling knot in its stained oak planking, the black wrought-iron handle, the macho studwork so beloved by the Spanish, the twisted black metal of the grille, through which, even now, she would be staring, waiting.

Sweat crawled like spider legs down his face, his limbs grown soft from too many years away. In his own mind he was back on the streets of Dublin in the early Eighties, pissing ahead of Tommy Hanrahan and his bunch of vicious little shits. Eleven years old, quick as a switchblade and twice as sharp, he was laughing, cursing, taunting them over his shoulder, feeling the chill air run across his arms and legs like a pulse of power, the walls and balconies of the flats towering above, funnelling them all towards the corner alley where Sean Carmody and his gang, the ones who changed his life by taking him in, waited with bats and bricks to spring a savage surprise.

A different world, a different time, a different life. Who would ever have guessed skinny little Dec would come so far? And for what? To end it here, with his face kicked flat in the Spanish dust? Fuck off. He felt his lungs expand to greet the extra oxygen he needed and a surge of energy flood into his calf muscles, into his thighs. The heaviness of doubt fell away and his speed picked up even as he reached the patio. The door was only five metres off when the crump of the shotgun reached his ears and he felt the first shower of pellets whistle past, then . . . Shit, oh shit . . . the scalding twist of pain in his right hip wrenched him around, sent him spinning like he’d been shoved by the hand of God, and he stumbled, wheeling, somehow still upright, clawing the air in front of him, throwing himself out towards the door.

And he was there, slamming into the hard wood, and the door opened and he pushed through, falling, the shredded muscle of his thigh burning like a rod of molten iron, hope alive in him again. But where was she? Nowhere to be seen, and a wave of cold fear smashed into him as he heard the feet pounding up behind, the double click of hammers being cocked, and he turned, saw the dark man above him, face blank, eyes expressionless, just a halo of blond hair burnished by the moonlight behind and the gun glinting level at his waist, trigger finger tensing.

Oh shit, oh fuck, where in the name of—?

The mystery surrounding the disappearance of millionaire Irish estate agent Cormac Horgan was solved yesterday when remains washed up on the banks of the River Avon in southwest England were identified as his.

Horgan, 29, of Gorteen House, Skibbereen, Co. Cork, who vanished last week, was said to have been in despair after suffering catastrophic business losses in the downturn.

His body was discovered by a dog-walker two miles from the Clifton Suspension Bridge in Bristol, a well-known “magnet” for would-be suicides.

Mr. Seamus Horgan, an uncle of the deceased, said his nephew Cormac was “a pillar of the local community.”

A business associate, who did not wish to be named, said Mr. Horgan was under “unbearable pressure” to repay debts of €6 million following the collapse of the family-run Horgans chain of estate agents.

“Cormac was under fierce financial and emotional strain. The banks were turning the screw and he faced losing everything. I think it was just too much for him.”

A spokesman for the Irish Property Association, Colm Donegan, said Mr. Horgan’s death brings to 26 the number of “financial casualties” from the property and construction industries to have taken their own lives in the past two years of economic turmoil.

The Bristol Coroner’s Office will release Mr. Horgan’s remains tomorrow, with a formal inquest to follow. Mr. Horgan, who was . . . turn to page 3