Items related to Germany and Agricola 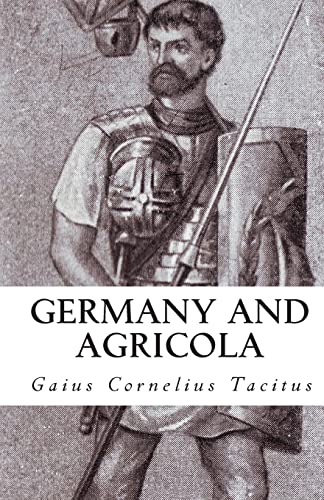 Oxford Translation Complete Edition with Introduction and Footnotes. The "Germania" describes with vividness the fierce and independent spirit of the German nations, with many suggestions as to the dangers in which the empire stood of these people. The "Agricola" is a biographical sketch of the writer's father-in-law, who, as has been said, was a distinguished man and governor of Britain. It is one of the author's earliest works and was probably written shortly after the death of Domitian, in 96. This work, short as it is, has always been considered an admirable specimen of biography on account of its grace and dignity of expression. Whatever else it may be, it is a graceful and affectionate tribute to an upright and excellent man.

Publius (or Gaius) Cornelius Tacitus (AD 56 - AD 117) was a senator and a historian of the Roman Empire. The surviving portions of his two major works-the Annals and the Histories-examine the reigns of the Roman Emperors Tiberius, Claudius, Nero and those who reigned in the Year of the Four Emperors. These two works span the history of the Roman Empire from the death of Augustus in AD 14 to (presumably) the death of emperor Domitian in AD 96. There are enormous lacunae in the surviving texts, including one four books long in the Annals. Other works by Tacitus discuss oratory (in dialogue format, see Dialogus de oratoribus), Germania (in De origine et situ Germanorum), and biographical notes about his father-in-law Agricola, primarily during his campaign in Britannia (see De vita et moribus Iulii Agricolae). Tacitus was an author writing in the latter part of the Silver Age of Latin literature. His work is distinguished by a boldness and sharpness of wit, and a compact and sometimes unconventional use of Latin.