Items related to I Loved Lucy: My Friendship with Lucille Ball

Tannen, Lee I Loved Lucy: My Friendship with Lucille Ball

I Loved Lucy: My Friendship with Lucille Ball 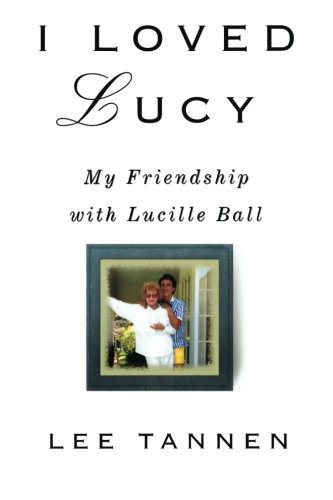 Few people knew America's comic sweetheart Lucille Ball the way Lee Tannen did. Lee first met Lucy as a child but cemented their close and enduring friendship as an adult. During the last ten years of Lucy's life--years mostly lived out of the spotlight and mainly around a backgammon table in New York, Beveryly Hills, Snowmass, Colorado and Palm Springs, Lee was fortunate enough to be sitting opposite Lucy. For the first time we get a glimpse of what it was like to be with Lucy, the way she truly was, and the way she chose to live. This is Lucy the way you've never seen her before; a warts and all look at arguably the most famous female entertainer of the twentieth century! Perhaps Lucy's daughter Lucie Arnaz summed it up best when she said,"What a wonderful look through the keyhole at this unique and complicated woman. A more perfect portrait of the the lost Lucy years I cannot imagine being drawn. It had me in tears. Good tears. People should read I LOVED LUCY."

Lee Tannen is a writer and producer who lives in New York City.

While Kathleen Brady's outstanding Lucille: The Life of Lucille Ball (1994) is still the benchmark for biographies on the red-headed comedienne who ruled the TV airwaves from 1951 through 1974, this slighter memoir, focusing on the last decade of her life, is still a treat for fans who continue to love Lucy. Tannen, a distant relative through marriage, befriended Ball (1911-1989) during the last decade of her life. By this time, Ball was spending most days playing backgammon and confining professional appearances mostly to yearly Bob Hope specials. Whereas Jim Brochu's Lucy in the Afternoon (1990) covered the same ground, Brochu pulled memories from Ball as they toiled over the backgammon table, creating an oral history of her professional and private life. Tannen's portrait of Ball is less reflective on the past, instead concentrating on her frustration at being denied one of the great joys of her life her work because of bad health and poor decisions. Gary Morton is presented as an absentee husband (when not golfing, he's in his study on the phone with friends). His bad career advice leads Ball into two late-in-life disasters: a TV movie (1985's Stone Pillow), which ruined her health, and the poorly conceived TV series Life with Lucy (1986), which, when canceled, convinced her that she no longer had a career or fans who wanted to see her. Tannen believes that this led Lucy to lose enthusiasm for life. This affectionate and intimate but by no means rose-colored portrait presents Ball as a demanding taskmaster at a loss during her twilight years. Fans won't learn much new here, but it's still a worthwhile visit. Photos not seen by PW.

1. I Loved Lucy : My Friendship With Lucille Ball

2. I Loved Lucy: My Friendship with Lucille Ball

3. I Loved Lucy: My Friendship with Lucille Ball