Items related to The Reagan Files: The Untold Story of Reagan's...

The Reagan Files: The Untold Story of Reagan's Top-Secret Efforts to Win the Cold War (Based on Recently Declassified Letters and National Security Council Meeting Minutes) 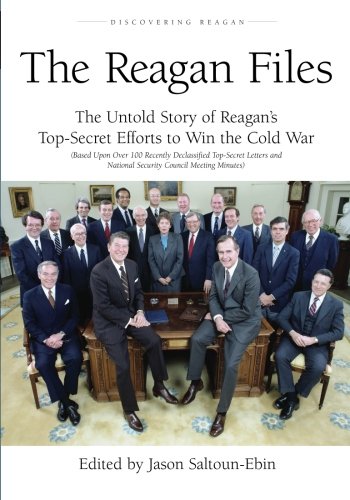 LOS ANGELES (MMD Newswire) November 3, 2010 -- President Ronald Reagan's name is often invoked by modern politicians who celebrate the Gipper's commitment to conservative values and foreign affairs. "The Reagan Files: The Untold Story of Reagan's Top-Secret Efforts to Win the Cold War" by Jason Saltoun-Ebin (ISBN 1453633057), gives readers an unprecedented look at how the nation's 40th president worked to win the war that divided the world's two most powerful nations. Drawing on formerly top secret National Security Council meeting minutes and private letters between President Reagan and Soviet leaders, Saltoun-Ebin takes readers inside the White House Situation Room to see what it was like to be side-by-side with Reagan while he made decisions that would end the Cold War and shape the 21st Century. The book reveals President Reagan's leadership skills, political judgment and intellectual prowess during his presidency in the 1980s. "It immediately occurred to me that these were the most important documents to have ever been released at the Reagan Library," Saltoun-Ebin said. "Finding what Reagan said and thought proved to be extremely difficult, and these documents contained Reagan's uncensored thoughts on all areas of foreign policy."

The Reagan Files takes readers inside the White House Situation Room to see what it was like to be with President Reagan when he made his most important foreign policy decisions. So, if you ever wanted to know what it was like to be in the room with the President, Vice President, Secretary of State, Secretary of Defense, Director of CIA, and the National Security Adviser when they are talking about whether or not to take military action against the Soviet Union (and other countries) and potentially starting World War III, this is the book for you.

The book is based on over 100 recently declassified documents from the Ronald Reagan Presidential Library, and includes all the recently released private letters between Reagan and the four General Secretaries of the Soviet Union during the Reagan administration.

The Soviets have spoken as plainly as Hitler did in "Mein Kampf." They have spoken world domination. At what point do we dig in our heels?
-- President Reagan, July 6, 1981.

If we don't take action now, three or four years from now we'll have another situation and we will wonder why we didn't go for it when we had the whole country with us. I'm tired of looking backward.
-- President Reagan, December 21, 1981.

[S]ome day people are going to ask why we didn't do something now about getting rid of nuclear weapons.
-- President Reagan, September 8, 1987.

1. The Reagan Files: The Untold Story of Reagan's Top-Secret Efforts to Win the Cold War (Based on Recently Declassified Letters and National Security Council Meeting Minutes)