Items related to Social Change in Thailand:: A. Thomas Kirsch, a Northeastern...

Social Change in Thailand:: A. Thomas Kirsch, a Northeastern Village, and Two Families 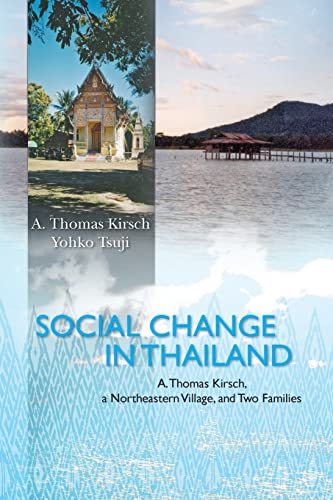 Two anthropological studies in this book examine a remote village and two families to illustrate the tremendous changes that have occurred in Thailand since the 1960s. "Nong Sung," written by deceased Cornell Professor, A. Thomas Kirsch who was one of the pioneers in Thai studies, depicts a farming village in Northeast Thailand in 1962-63. Though the village of Nong Sung was situated "a bit beyond the 'end of the road'" without paved streets, electricity, or running water, he saw it changing. He observed the increasing influences of the outside world on this village and the incorporation of its residents into the national system and culture. "A Tale of Two Thai Families" by Kirsch's wife, Yohko Tsuji, documents many more changes over the next five decades by following two families in Nong Sung and Bangkok who had "adopted" her husband. Her essay confirms Kirsch's prediction that the once clear rural-urban distinction would get blurred with time. On her 2007 visit to Nong Sung, Tsuji found that the Nong Sung envisioned by village youth in 1963 had become a reality with paved streets, automobiles, electricity, television, and a market. Moreover, using the national educational system and pursuing non-agricultural careers in broader society, the children of the village family firmly anchored themselves among the urban middle-class. Education, both inside and outside of Thailand, also played a significant role in these two families' integration into the globalized world beyond the boundaries of their homeland. The book contains forewords by two prominent anthropologists of Southeast Asia, Charles Keyes and Judy Ledgerwood, as well as an insightful description of Kirsch's life, "A Memoir," by O.W. Wolters, a renowned historian of Southeast Asia.

1. Social Change in Thailand: : A. Thomas Kirsch, a Northeastern Village, and Two Families