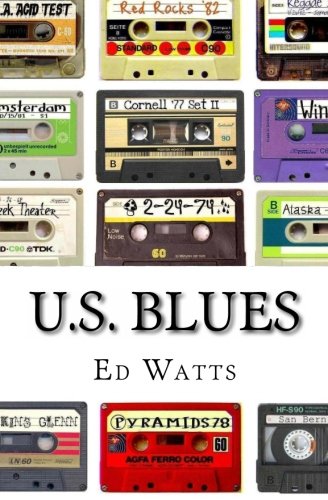 Wisconsin: 1985. When Peter Van de Carr stumbles across a body outside a Grateful Dead show, he decides that solving the murder is his last chance to save any idealism left in the Deadhead scene. The only problems are: he has no idea how to conduct a murder investigation, the cops don't want his help, and after a lifetime of drugs his mind is about as sharp as a Frisbee.

As Peter stumbles toward finding the killer of the little-known victim, an obsessive taper at the shows, he brings the reader with him through the seedy and humorous underbelly of the Deadhead subculture of the mid-80's.   The world of endless drugs, burnt-out disillusionment, and ever-present paranoia of the Reagan regime form the backdrop to a crime that proves to be far more bizarre than even Peter imagined . . .

A hilarious addition to the stoner noir genre, U.S. Blues has enough suspense to keep you turning the pages, and enough laugh-out-loud moments to make you root for Pete and his fellow "Guinea pigs of a failed experiment."

"Smoke me and read this." -Weed

Book Description CreateSpace Independent Publishi, 2011. Paperback. Condition: Good. Connecting readers with great books since 1972. Used books may not include companion materials, some shelf wear, may contain highlighting/notes, may not include cdrom or access codes. Customer service is our top priority!. Seller Inventory # S_264617014