Simpson, A. B. The Life of Prayer and the Power of Stillness

The Life of Prayer and the Power of Stillness 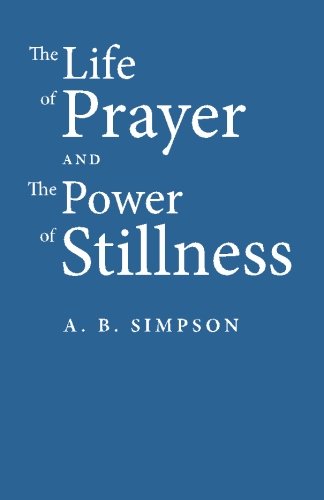 The Life of Prayer is an inspired and inspiring primer on prayer. Learn to pray using the example of the Lord's Prayer. The New Testament shows that we can always pray to God as our loving Friend. Understand God's promise to us when we pray in Jesus' name. Learn what are the hindrances to prayer and how to deal with them. Strengthen your understanding of the power of faith-filled prayer. Included here is The Power of Stillness, A. B. Simpson's best-loved tract, which shares his secret of allowing God to work in us.

Albert Benjamin Simpson was the founder of the Christian and Missionary Alliance. Born on Prince Edward Island, Canada, Simpson was raised in the Scottish presbyterian tradition. He was educated at Knox College, Toronto, and subsequently ordained into the Presbyterian Church of Canada. After pastoring churches in Ontario, Kentucky, and New York, he began a mission to the immigrants and the unchurched of New York City. This small mission, driven by Simpson's immense energy and his Spirit-filled Christian faith, led to the founding of the Christian and Missionary Alliance. A. B. Simpson was not only a talented organizer and preacher but also a popular hymn writer and author.

1. The Life of Prayer and the Power of Stillness

Shipping: US$ 45.66
From United Kingdom to U.S.A.
Destination, rates & speeds