Items related to Yes Ma'am, No Sir: The 12 Essential Steps for Success...

Carter, Coach Yes Ma'am, No Sir: The 12 Essential Steps for Success in Life

Yes Ma'am, No Sir: The 12 Essential Steps for Success in Life 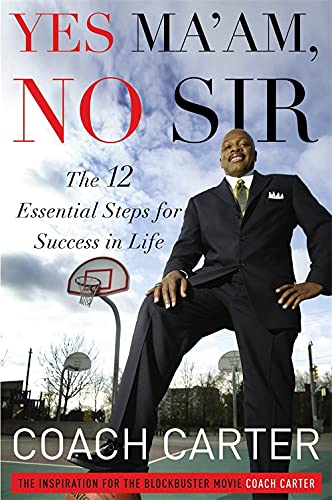 Accountability . . . Overcoming adversity . . . Taking charge of your life . . . Learning how to succeed when others expect you to fail. These are the essences of Coach Carter's basic building blocks for winning in life. From learning about the quality of one's character to the love of learning-as well as the importance of self-discipline and spirituality-Coach Carter takes you through his own life experiences and shows you how you, too, can become successful in your everyday life. His fundamental belief is that you must start with respect for others, your community, and your environment before you can attain your own goals, both personally and professionally.

As the no-nonsense head coach of the Richmond High School boys' basketball team from 1997-2002, Ken "Coach" Carter gained nationwide fame when he locked his undefeated team out of the gym in order to push them to improve their grades. Since then, Coach Carter has remained in the public eye as a highly sought-after speaker-partaking in more than 125 speaking engagements per year-for youth groups and educational panels worldwide. In January 2012, Coach Carter opened the Coach Carter Impact Academy, which provides room and board, as well as a business school for developing entrepreneurs. Over the years, the author has received numerous awards and continues to help at-risk youth daily through the Coach Ken Carter Foundation.

YES MA'AM, NO SIR spells out Coach's 12 lessons for success. Inspirational, motivational, and informational, this is must-reading for anyone who truly wants to know how to get ahead.

Ken Carter was previously Head Coach for Richmond High School (Richmond, CA), from 1997 - 2002. Coach Carter is best known for locking out his undefeated Varsity basketball team in order to push them to improve their grades, which was later featured in a highly successul major motion picture starring Samuel L. Jackson as Coach Carter.

These days, Ken Carter continues to be an active advocate for Richmond's youth and is active in his community. In addition to coaching, Carter is owner/operator of Prime Time Publications and Prime Time Sports.

Coach Carter attended George Fox University in Oregon and has to his credit the following awards: Harvard Club's Distinguished Secondary Educator Award, NAACP's Impact Citizen of the Year Award, California State Lottery/Governor Gray Davis' Heroes in Education Award, San Francisco Mayor, Willie Brown's Leadership Award, California's Unsung Heroes Award, the A.N.G. California Boy's Coach of the Year Award, and has been presented with a Proclamation from the City of Richmond. He was recently honored as a recipient of CityFlight Newsmagazine's the "Ten Most Influential African Americans in the Bay Area" for 2000 in the Sports category.

"The true lessons come to life through Carter's stories. His accounts of his own journey as one in a family of nine children trying to make ends meet on a small farm in rural Mississippi as well as chronicling how his players-most of whom had rough upbringings in Richmond-overcame obstacles, poverty, and adversity with opportunity and encouragement are emotional and inspirational. Coach Carter scores big with this efficient, straightforward read filled with no-nonsense observations on how to win in life."―Publishers Weekly

1. Yes Ma'am, No Sir: The 12 Essential Steps for Success in Life

2. Yes Ma'am, No Sir: The 12 Essential Steps for Success in Life

3. Yes Ma'am, No Sir: The 12 Essential Steps for Success in Life