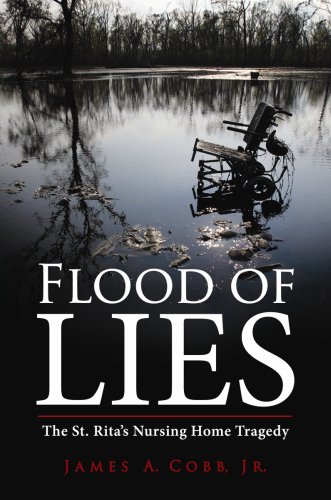 In the media storm that followed Hurricane Katrina in 2005, nursing home owners Sal and Mabel Mangano were vilified for allegedly causing the deaths of 35 residents of St. Rita's Nursing Home in low-lying St. Bernard Parish. This book, written by the lawyer who defended them, reveals the gripping, true story behind the couple's heartrending decision not to evacuate and their persecution at the hands of the government sworn to protect them.

“When an elderly couple is charged with murder in the drowning deaths of thirty-five bed-ridden residents of St. Rita's Nursing Home, an emotional edge-of-your-seat thriller takes off like a shot! The players: a wily and profane defense lawyer, a ferocious prosecutor, devastated families of the victims, and a ravenous media that brands the defendants 'Monsters of Hurricane Katrina.' My advice—block out enough time to read this wonderful book in one sitting.”
—John Berendt, Midnight in the Garden of Good and Evil

“As if the story covered in this book were not passionate enough, the author gives readers unrestricted access to his heart, soul, and the passion he experienced as his life was consumed by defending the operators of St. Rita's Nursing Home after Hurricane Katrina. The story is gripping, the details revealed are amazing, but the emotional link that emerges between the reader and the author—a key character in the story—makes this one of the most extraordinary stories ever told.”
—Dennis S. Mileti, PhD, director emeritus, Natural Hazards Center

“This is more than a story about Katrina. It is that, told from an original perspective, but it's also a story of abuse of power, of political ambition, of survival, and of a trying to make life ordinary again—when ordinariness amounts to triumph.”
—John M. Barry, Rising Tide: The Great Mississippi Flood of 1927 and How It Changed America and Roger Williams and the Creation of the American Soul: Church, State, and the Birth of Liberty

In the aftermath of Hurricane Katrina, the nation reeled in shock as the story of St. Rita's Nursing Home unfolded in a flood of constant, garish—and often wildly misleading—media coverage. Now, author James A. Cobb, Jr., tells the true story behind the tragedy in this powerful account of loss, devastation, and his relentless pursuit of justice.

James A. Cobb, Jr., has practiced law since 1978 and was a managing partner in the firm Emmett, Cobb, Waits, & Henning. Cobb has also served as an adjunct professor at Tulane University Law School since the 1980s and has taught at Harvard since 2008. He lives and practices law privately in New Orleans.