Items related to America's Queen: The Life of Jacqueline Kennedy... 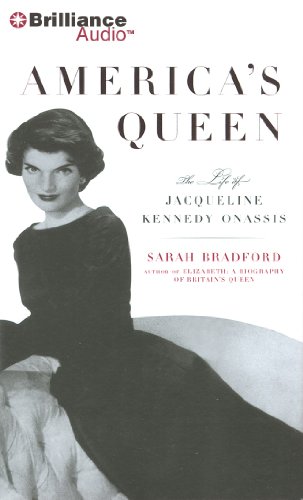 Jacqueline Kennedy Onassis has captivated the American public for more than five decades. From her introduction to the world as "debutante of the year" in 1947 to her untimely death in 1994, she has truly remained America's answer to royalty. In America's Queen, the acclaimed biographer of Queen Elizabeth and Princess Grace reveals the real Jackie in a sympathetic but frank portrait of an amazing woman who has dazzled us for years.

Using remarkable new sources—including in-depth interviews with Jackie's sister, Lee Radziwell—Sarah Bradford has written a timely celebration of a life that was more private than commonly supposed. Jackie's privileged upbringing instilled rigid self-control while her expedient marriage into the overwhelming Kennedy clan consolidated her determination. Revealing new testimony from many of the couple's friends shows the profound complexities both of this apparently very public relationship and of her controversial marriage to Aristotle Onassis.

Here is the private Jackie—neglected wife, vigilant mother, and working widow—whose contradictory and fascinating nature is illuminated by all that Bradford has discovered.

Fresh from her well-received life of Queen Elizabeth II, the English historian and biographer Sarah Bradford turns her hand to America's own answer to royalty, Jacqueline Kennedy Onassis. Painstakingly detailed, impressively fair, the result is the most definitive account yet of a woman who captured the imagination of the American public like no First Lady before or after her. Bradford seems to have interviewed almost everyone who had ever been intimate with Onassis, including George Plimpton, Gore Vidal, Joan Kennedy, and even a few ex-lovers. Most notably of all, Jackie's sister Lee Radziwill speaks with unexpected frankness about the mixture of rivalry and affection that marked their relationship since childhood. Jackie-lovers, take note: this is no hagiography, and its subject certainly comes off as no saint. As gracious as this American icon could be, she also had moments of coldness and even greed, including a particularly shocking moment by the bedside of Ari Onassis's dying son. Yet, in the end, non-airbrushed anecdotes like these only serve to make this most private of public figures even more fascinating. Jackie was, as Bradford writes, "a complex woman of many facets, concealed insecurities and intricate defense mechanisms, a strong urge toward the limelight contrasting with a desire for privacy and concealment.... Behind the mask of beauty and fame lay a shrewd mind, a ruthless judgment of people, antennae finely turned to any sign of pretentiousness or pomposity, and a wry, even raunchy sense of humor." The figure who emerges from subsequent pages is as compelling as the heroine of any novel, and it is to Bradford's credit that she doesn't seem to have fallen completely under her subject's spell. Her approach is sympathetic, but never fawning; candid, but never sensationalistic. For those who are curious not about Jackie's glamour but about its source, America's Queen offers an unprecedented look at the flesh-and-blood woman behind the Camelot myth. --Carlotta DeWitt

Sarah Bradford is a historian and biographer. She is the bestselling author of several biographies, including Disraeli, selected as a New York Times Notable Book of the Year; George VI; Princess Grace; and The New York Times bestseller Elizabeth. Married to the Viscount Bangor, she lives in London.

Book Description Brilliance Audio, 2011. MP3 CD. Condition: Good. Connecting readers with great books since 1972. Used books may not include companion materials, some shelf wear, may contain highlighting/notes, may not include cdrom or access codes. Customer service is our top priority!. Seller Inventory # S_262943923