Items related to The Book of Jewish Gangsters

The Book of Jewish Gangsters 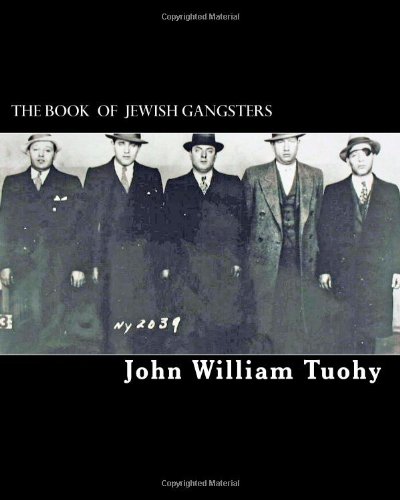 The brief and bloody history of the rise and fall of the Jewish-American gangster in the American midwest from the year1900 through 2000 They were, largely, the sons of America’s newest and poorest immigrants who had crowded into New York’s then desolate, filthy and overcrowded tenement slum, the lower east side. With limited educations and often facing appalling discrimination, many filtered into the once massive and much feared Jewish street gangs that ruled large parts of Manhattan and the Boroughs. Despite a general erroneous recreation of the role of Jewish gangsters within the early American Jewish ghettos, these hoodlums were hardly heroes within the community. Rather, they were the scourge of the Jewish neighborhoods, prying on Jewish business owners and peddling young Jewish girls into the world of prostitution. In the early part of the 20th century, Jewish mobsters moved from street gang status to professional criminals though the labor racket wars. Hiring themselves out to both management and unions as leg breakers and sluggers, Jewish gangsters like Kid Dropper Kaplan, (Kid dropper got his nickname as a child. He knocked over children sent to the stores by their parents and took their money) Johnny Spanish and Dopey Benny Fein came to dominate the labor extortion business. The Jews in organized crime blossomed during prohibition when ethnic hostilities between the Sicilian-Italian Americans, the Irish and the Jews were set aside in the name of fortune. Jewish gangs virtually controlled all or most of the bootleg operations in Cleveland Ohio, Philadelphia and Brooklyn under the leadership of Dutch Schultz in New York, Moe Dalitz in Ohio, Charlie Solomon in Boston and Longy Zwillman in New Jersey and Hollywood. Jews especially played a large role in the creation and management of the National Crime Syndicate in the 1930s. Except in a few, rare cases, Jewish mob leaders had not built up criminal organizations and those there were created quickly faded and died as America’s Jews filters into main stream society, their desperate poverty and hopelessness now a thing of the past. Although far less in number then they had been in the 1920s and 1930s, Jewish gangsters, such as Meyer Lansky, Moe Dalitz and Gus Greenbaum, were still a considerable force in the underworld right after World War 2 up until the very early 1970s, when old age took its natural toll. By then, the typical Jewish mobster, lacking the numbers needed for any other type in the United States had moved into management positions in the various Outfits (Again, like Lansky and Dalitz) or controlled large segments of loan sharking business. Something of Jewish Mafia exists today in the form of the Israeli mafia, which, at the start of the 21st century, is heavily involved in White Slavery and narcotics trafficking in which is works closely with the New York based Gambino crime family. Working class Russian Jew also dominates large fractions of the various Russian mobs, wrongly called The Russian Mafia (They are hardly a united group). However, how many of these hoodlums are actually Jewish is a mystery. Under the Soviet government, thousands of gangsters claimed Jewish ancestry so they would be allowed to relocate in the United States and Israel.

I want to thank you very much for buying my books.