Items related to Understanding the American Promise: A History, High... 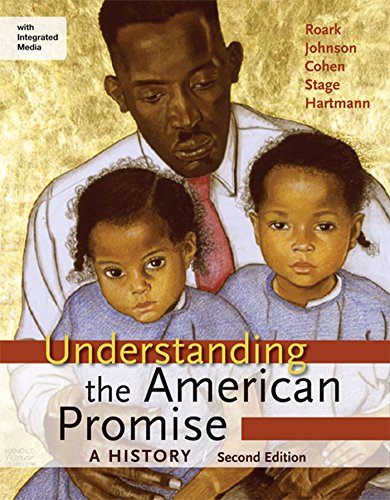 James L. Roark (Ph.D., Stanford University) is Samuel Candler Dobbs Professor of American History at Emory University. In 1993, he received the Emory Williams Distinguished Teaching Award, and in 2001 2002 he was Pitt Professor of American Institutions at Cambridge University. He has written "Masters without Slaves: Southern Planters in the Civil War and Reconstruction" and coauthored "Black Masters: A Free Family of Color in the Old South" with Michael P. Johnson.Michael P. Johnson (Ph.D., Stanford University) is professor of history at Johns Hopkins University. His publications include "Toward a Patriarchal Republic: The Secession of Georgia"; "Abraham Lincoln, Slavery, and the Civil War: Selected Speeches and Writings"; and "Reading the American Past: Selected Historical Documents," the documents reader for "The American Promise." He has also coedited "No Chariot Let Down: Charleston s Free People of Color on the Eve of the Civil War" with James L. Roark.Patricia Cline Cohen (Ph.D., University of California, Berkeley) is professor of history at the University of California, Santa Barbara, where she received the Distinguished Teaching Award in 2005 2006. She has written "A Calculating People: The Spread of Numeracy in Early America" and "The Murder of Helen Jewett: The Life and Death of a Prostitute in Nineteenth-Century New York," and she has coauthored "The Flash Press: Sporting Male Weeklies in 1840s New York." Sarah Stage (Ph.D., Yale University) has taught U.S. history at Williams College and the University of California, Riverside, and she was visiting professor at Beijing University and Szechuan University. Currently she is professor of Women s Studies at Arizona State University. Her books include "Female Complaints: Lydia Pinkham and the Business of Women s Medicine" and "Rethinking Home Economics: Women and the History of a Profession.""