Items related to Jumbo: The Greatest Elephant in the World

Chambers, Paul Jumbo: The Greatest Elephant in the World 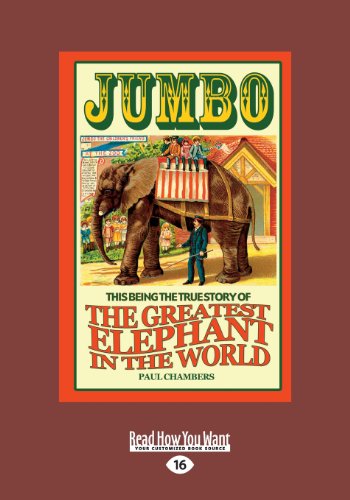 A magical blend of true story and popular science, ''Jumbo'' is the wonderful, colourful biography of the greatest elephant ever known. Born in Africa in 1863, Jumbo was orphaned by ivory - hunters, 'rescued' and taken to France. Mistaken for a runt, he was sold to London Zoo, where he became the favourite of the British populace, from Queen Victoria to the young Winston Churchill - until, talent - spotted by the American circus - owner P.T. Barnum, and despite public outcry and Royal protestations, he was taken across the Atlantic to New York. There, having once more conquered public hearts and now a beast of giant proportions, he 'befriended' a smaller elephant, Tom Thumb - in saving whose life he was to meet a tragic end.This book not only unravels the story, but also looks at Jumbo from a zoologist's point of view. Why was he thought to be a runt? What helped or hindered him in adapting to unfamiliar surroundings from one hemisphere to the other? How was he likely to have reacted to the overwhelming public attention - and to isolation from his natural habitat? The author draws illuminatingly on modern knowledge of elephant behaviour and biology to shed light on the mysteries surrounding Jumbo's life.

Paul Chambers is a writer and TV producer, whose previous titles include A Sheltered Life, a history of the giant tortoise, Bones of Contention and The Cock Lane Ghost. He lives in Hertfordshire.