Items related to Campbell's Voyage Round the World

Campbell's Voyage Round the World 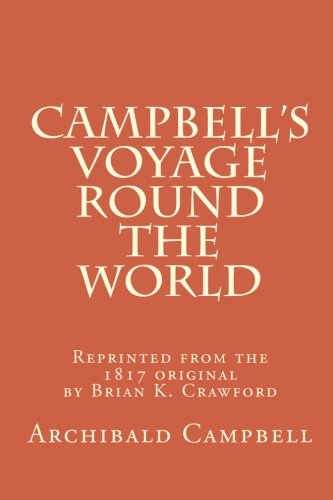 In 1815, a man named James Smith took the steam ferry across the Firth of Clyde in Scotland. His attention was drawn to a fiddler who was entertaining the poorer steerage passengers. The musician was a young man with the weathered look of a seaman, but his legs ended in dirty rags, for he had no feet. The man’s name was Archibald Campbell, and he had quite a tale to tell - two shipwrecks, a nightmare of survival in the frozen islands of the North Pacific, and the loss of both feet to frostbite. He had found his way to Hawai’i, where he was shown much kindness by Kamehameha, the King of Hawai’i. Later he returned to Scotland, destitute, crippled, and unable to find work. Smith was so moved by the unfortunate seaman’s tale that he decided to record Campbell’s astonishing adventure and publish a book, with the proceeds to go entirely to Campbell. This is that book, reprinted in full, with added explanatory footnotes.

Brian Crawford is a computer programmer living in Marin County, California, with his wife and son. In addition to several collections of short fiction and a series of memoirs about his hippie days, he has written Toki, a historical novel about the South Pacific kingdom of Tonga. He has also reprinted a number of out-of-print books about Pacific exploration. His fiction has been published in the print magazines Bust-Out Stories and Paradox Historical Fiction, and the online journals Slow Trains, e-clips, Clean Sheets, Sedona’s Attic, and Oysters and Chocolate, where his story The Heat won a Grand Prize. His short-short story Heart to Heart won Honorable Mention in the Whim’s Place 2006 Flash Fiction contest, and The Find won Second Prize

1. Campbell's Voyage Round the World