Items related to Solar System Maps: From Antiquity to the Space Age... 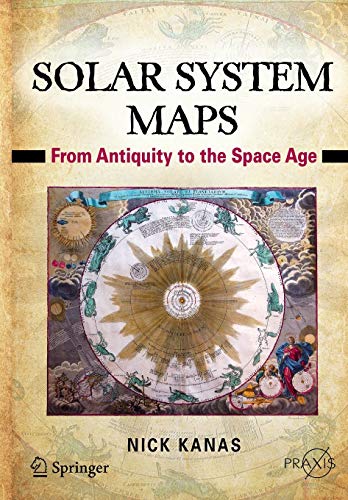 This volume tells the fascinating story of Man’s conceptualization of the solar system from the earliest times, when star maps represented what could be seen to the naked eye, to the modern age, when powerful telescopes and probes afford fresh insights.

In recent years, there has been increased interest in our Solar System. This has been prompted by the launching of giant orbiting telescopes and space probes, the discovery of new planetary moons and heavenly bodies that orbit the Sun, and the demotion of Pluto as a planet. In one generation, our place in the heavens has been challenged, but this is not unusual. Throughout history, there have been a number of such world views. Initially, Earth was seen as the center of the universe and surrounded by orbiting planets and stars. Then the Sun became the center of the cosmos. Finally, there was no center, just a vast array of galaxies with individual stars, some with their own retinue of planets. This allowed our Solar System to be differentiated from deep-sky objects, but it didn’t lose its mystery as more and more remarkable bodies were discovered within its boundaries.

This book tells the exciting story of how we have conceptualized and mapped our Solar System from antiquity to modern times. In addition to the complete text, this story is made more vivid by:

· 162 Solar System and planetary maps, diagrams, and images (over a third in color);

· direct quotes and figures from antiquarian, contemporary, and Space Age documents and photographs that allow the reader to track how humans have viewed the Solar System from original sources;

· nine tables that compare the various world views, relative planetary positions, and components of the Solar System with each other.

Broad in scope and rich in imagery, this book will draw the reader into the story of our Solar System and how it has been mapped since the beginning of recorded time.

Dr. Nick Kanas is an Emeritus Professor of Psychiatry at University of California, San Francisco. He has been collecting antiquarian star maps for over 30 years. He is a member of several map collector societies and has lectured on the history of celestial cartography at scientific and non-scientific meetings of organizations such as the Adler Planetarium, the Lick Observatory, and the Sydney (Australia) Observatory, and annual meetings of the International Conference on the History of Cartography, the Society for the History of Astronomy, the Flamsteed Astronomical Society in Greenwich, U.K. and the California Map Society. He has written articles on this subject for a number of journals and magazines including 'Sky & Telescope' and the 'Journal of the International Map Collector's Society.'

Nick is a Fellow of the Royal Astronomical Society (London). The first edition of his title 'Star Maps' (Springer, 2007) was well-reviewed and went through two printings. He continues to write and lecture on antiquarian star maps for various groups, including professional conferences and meetings of amateur astronomers and map collectors.

1. Solar System Maps: From Antiquity to the Space Age (Paperback or Softback)

2. Solar System Maps : From Antiquity to the Space Age

3. Solar System Maps : From Antiquity to the Space Age

6. Solar System Maps: From Antiquity to the Space Age